Method have redesigned recycling bins for modern spaces to be visible, consistent and effective. Method’s bins have won numerous awards for their innovative, modern design and ability to increase recycling rates.

Organisations are spending more on office design and fitouts, however bins have become an afterthought when they should be a priority. Particularly as the focus on sustainable business practices continues to grow and influence purchasing decisions. That’s where Method’s beautiful bins come in. The bins are designed to be out in the open, complementing modern aesthetics and becoming a featured part of workspace design.

Method started when co-founders Steven and India Korner continuously saw organisations who wanted to recycle without the tools to be successful. Often there were ugly bins that were hidden in the corner or in cupboards, under desk bins that encourage users to place all of their waste in one bin, and generally inconsistent waste and recycling systems across a space or building. All of which act as barriers that inhibit recycling.

Method’s bins are now part of the furniture in leading organisations around the world, helping them to recycle more, and waste less. Including renowned British architecture firm Foster + Partners, The Office Group’s beautiful co-working spaces, the historical Sydney Cricket Ground, the Design Council and many more.

Method’s 60L recycling bins are placed next to each other to create flexible recycling stations. The communal stations are then located throughout a space or building, while removing convenient general waste options such as desk bins. Without a desk bin, individuals make a short walk to the nearest station, where all recycling and waste streams are available.

To help with the transition, Method have also developed desktop Precyclers. Precyclers are desktop storage for waste, recycling and paper at the desk, encouraging separation before being emptied into the nearest station. Altogether, making recycling more convenient, so users don’t need to hunt for a hidden bin or make a special trip.

Through the simple act of making recycling more convenient than general waste options, recycling rates will increase. But Method’s bins are also coded with information to make effective waste separation even easier for users. The brightly coloured lids are chosen to match local industry standards, coupled with clear graphics to make them stand out within a space.

With Method’s bins, recycling becomes a part of the furniture and workplace culture. Through Method’s philosophy of Open Plan Recycling, the bins become a visible statement of an organisation’s commitment to recycling and sustainability.

Consistency is key when creating new behaviours, so colour-coded bins and stations used consistently throughout a space or building means that recycling becomes an unconscious behaviour through regular use.

Further, one of the key factors Method have found for success is the increased accountability that comes from visibility. When users are visible to others, they’re more likely to consider where their waste should go. Method’s customers have also found that the bins have generated conversations about recycling and sustainability; changing recycling behaviours in the workplace and subsequently at home.

The New Method in Practice

Global design giant Canva are working towards some lofty sustainability goals – to be one of the most sustainable offices in the world. Being a fast-growing organisation that’s centred on design, they looked extensively for bins that would fit their modern workspaces and even considered making their own until they found Method.

“Since finding Method, we now have a waste solution that complements our aesthetic, is clear to the team, neat and scalable for our company…the hospitality staff have also found the bins easy to clean, re-line and maintain.”

With Method bins, organisations have found that they’re diverting significantly more waste from landfill or the incinerator. For example, a bank in New Zealand increased recycling rates from 30 per cent to 70 per cent through the introduction of Method.

Made from Recycled Materials

The black components of Method’s bins are made from at least 50 per cent recycled materials, and are fully recyclable at the end of their long life. This is something Method have been working on for a long time, and they’re working to increase this to 100 per cent when material supply and the infrastructure are ratified. Recycled materials are varied by nature and Method wants to ensure that the strength, durability and appearance are maintained.

Are you ready to specify the bins that code environmentally friendly behaviours into the design of a space? Or get them for your workplace? Get in touch – methodrecycling.com. 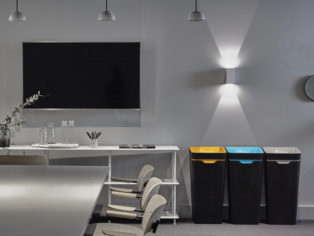