Recovery of the Dutch and Spanish construction sector is accelerating, improvement has not been that good since 2009

The positive signs in the Netherlands and Spain, which were seen throughout the whole of 2014, are also there in the first quarters of 2015 and seem to be more positive. The France and Italian construction sector are not recovering as fast as expected in earlier quarters, a lot of architects in these two countries are still struggling in the first part of 2015. These are some of the conclusions of the Q2 2015 European Architectural Barometer report, a quarterly research among 1,600 architects in eight European countries. European architects act as a leading indicator for the construction activities.

The British market keeps on improving, back at the pace which was already expected in 2014. One of the reasons for this is that the building permits for residential buildings have increased compared to last quarter and the construction confidence indicator shows a slight increase (+1.5 compared to -4.5 previous quarter). The Arch-Vision indicators are showing positive signs, e.g. the sentiment within architectural firms is positive in Q3 2014: a strong order book (+29) and turnover (+20) development. The first two indicators have a positive effect on the rolling barometers. Nevertheless there are signals that one should be careful about the future. The building permits for residential buildings showed a decline late 2014, which means this will come into effect in two to three years. Arch-Vision nevertheless predicts a growth of the market in 2015 (+3 percent) which will continue in 2016 (+3 percent) and 2017 (+3 percent). The upcoming two years the UK market will profit from the increasing permits in 2013 and first half of 2014.

From Q3 2010 onwards there has been a steady positive development among the German architects. Although the start of 2015 was promising: both the Rolling Order Book Barometer and the Rolling Turnover Barometer grew substantially in Q1. These were the highest grow figures since Q2-2011. However the growth in the second quarter was not that big as in the first quarter: the Rolling Order Book Barometer grew by 8 points (281) and the Rolling Turnover Barometer by 8 points as well (153). In Q2 only 7 percent of the architectural firms expect to see an empty order book in the next 12 months. There is however some concern: all three confidence indicators have declined in the last quarter. Next to that the building permits are relatively stable for some quarters now. Therefore Arch-Vision expects growth figures which are not as high as in the beginning of this decennium: 2015 (+1 percent), 2016 (+2 percent) and 2017 (+2 percent).

The French construction sector is hardly showing any improvement, but the sentiment is becoming less negative. There are still more French architects experiencing a decreasing order book (40 percent in the past semester) than an increasing order book (32 percent last semester), but the latter group was only 14 percent big in Q4 2014. So the gap between these two groups is narrowing. The drops in the order book (-9) and turnover (-16) development in Q2 2015 are not as big as the previous three quarters, but the fact that they are still negative shows that the French situation is not improving yet. However these figures were last shown in Q2 2012. Other indicators are also showing some movement to a less negative sentiment. The industrial and construction confidence indicators are at the same level as in Q1, whereas the consumer confidence indicator has improved, but is still negative. Therefore Arch-Vision predicts that the French construction market will decrease in 2015 (-2 percent) and 2016 (-1 percent) and will not recover before 2017 (2017: 0 percent).

The results for Spain are positive for the sixth quarter in a row. More architects reported an increasing order book (53 percent in Q2) instead of a decreasing order book (11 percent in Q2). These figures have not been this positive since the start of Arch-Vision in 2009. The more positive attitude is also reflected in the development of the building permits and the amount of architects with cancelled projects (38 percent in Q1 and 23 percent in Q2). The permits for residential buildings show a slight increase in the last quarter, but the permits for non-residential show a big increase. Given the latest results Arch-Vision concludes that the development in 2015 (+1 percent) will be better to the one in 2014 (-2 percent). The years after 2015 will show the road to recovery of the Spanish construction sector (2016: +1 percent and 2017: +2 percent).

In Italy there are still some drops in the order book and turnover development, but since Q1 2014 the drops are quite steady (app. -30 points). In comparison to Q1 2015 we see a slightly less decrease in both Barometers. There are more architects noticing an increase in their order book over Q2 2015 than in Q1 2015 (12 percent versus 4 percent). However the largest amount of architects (50 percent) noticed neither an increase nor a decrease. Italy has surpassed the low levels of the Rolling Order Book Barometer of Spain two years ago and is therefore the worst performing country. Improvement of the construction market in Italy seems to be far away. The data on building permits from the first semester of 2014 were slightly positive: they are however still much lower than in previous years. This will have its influence on the construction sector in the 2 – 3 years after the building permits have been granted. Therefore the outlook for the next twelve months is still not very promising. Arch-Vision predicts a shrinkage of the market by 4 percent in 2015, by 2 percent in 2016 and 1 percent in 2017. This on top of the decline in previous years (2014: -5 percent, 2013: -11 percent and 2012: -9 percent).

For the whole of 2014 the Dutch order book and turnover development were positive and they are even more positive in the first semester of 2015 (136 for the order book and 128 for the turnover in Q2). These are figures which are not seen since the start of Arch-Vision, leading the Rolling Barometers at a level which can be compared to 2012 (Rolling Order Book Barometer: -78 and Rolling Turnover Barometer -78). At this pace the Barometers can reach the level of Q3 2009 at the end of this year. The number of architects experiencing improvements (58 percent) is also the highest since Arch-Vision started the research. At the moment 17 percent expect an empty order book within the coming 12 months, which is also the lowest percentage in 4 years. The positive architectural sentiment can also be seen amongst other indicators such as the confidence indicators for the construction sector and industry. These show an increase in comparison to Q2 2014. Therefore Arch-Vision predicts an increase in 2015 (+4 percent) and even further improvement in 2016 (+4 percent) and 2017 (+4 percent).

2014 and the first semester of 2015 showed a quite stable positive development regarding the order books of Belgian architects; more architects reporting increasing (at least 30 percent, even 43 percent in Q2) order books instead of decreasing (at most 25 percent, only 19 percent in Q2) order books. This is also reflected in the quarter to quarter Order Book Barometer (Q2: 116) and the Turnover Barometer (Q2: 111) which are again higher than 2013. Only 9 percent of the Belgian architects expect an empty order book, which is one of the lowest percentages of the past 1,5 years. The building permits figures show opposite developments: a big drop for both residential and non-residential in 2014 and slight recovery in the first semester. In total together with relatively stable, but slightly negative confidence indicators this leads to a prediction of the Belgian construction sector by Ach-Vision which is one of a steady and modest growth in future years: +1 percent (2015), +1 percent (2016) and +2 percent (2017).

After the negative order book developments in 2013 the Polish quarter to quarter Order Book Barometer was positive again for the first three quarters of 2014 (103 every quarter). In Q4 2014 Arch-Vision saw this indicator temporarily drop to 93. However in Q1 and Q2 2015 this indicator was again at a level of earlier quarters (104 and 103) meaning that the number of architects that experienced their order book growing was bigger than the number who saw declining order books. This was already foreseen in Q4 since the number of architects that expected an empty order book within the next 12 months had decreased from 24 percent to 18 percent. Poland is a country which heavily relies on new build with respect to the construction sector volumes (73 percent). Therefore the trend in building permits and turnover development should be watched closely: declining building permits until last quarter and slightly more architects showing negative turnover development. All together Arch-Vision expects that the Polish construction sector will fluctuate between € 32 billion and € 34 billion euro: +1 percent (2015), +2 percent (2016) and +2 percent (2017).

These and many other results and trends of the developments of the European construction market can be found in the European Architectural Barometer, an international market research conducted among 1,600 architects in Europe. This study is conducted in Germany, France, Italy, Spain, United Kingdom, the Netherlands, Belgium and Poland by Arch-Vision four times a year. Besides indicators to forecast the European building volumes, a specific topic is highlighted each quarter. The topic in Q2 2015 was “Architectural Design and Technology trends”. 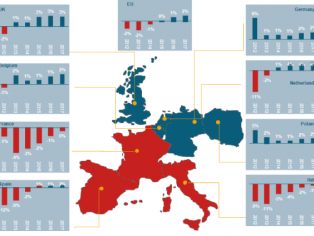