The UK consistently faces annual water shortages due to increased demand on supplies and changes in our climate. Sporadic long dry spells throughout the year cause many water companies to enforce hosepipe bans, meaning customers are left without full access to the service they pay for. Rainwater harvesting is an excellent way to ensure the continuation of your water supply, save on water bills and help safeguard the environment in one simple installation, allowing your self built dream home to be enjoyed fully.

In 2012 nearly 20 million people were affected by a hosepipe ban despite experiencing one of the wettest springs on record. Global warming has led to rainfall becoming more unpredictable and heavier in volume meaning the increase in amount and speed with which it is falling reduces the ability to collect and store it on a large scale. Combined with a population increase, water companies are struggling more than ever to keep up with demand.

Appliances such as slow running taps and low-flush WC’s save on mains water usage, however these ideas do not take on board that 50 per cent of household water usage is for non-potable applications; 30 per cent of all water usage for instance is for toilets, and therefore treated mains water is not necessary.

New regulations having an impact

A number of legalities have been enforced in a bid to reduce water usage, the Flood and Water Management Bill put in place in April 2010, being one, which gives water companies the right to impose stricter rules during water shortages. New building regulations also force the private sector to take water consumption into consideration with the introduction of Building Reg Part G, 17K, also implemented in April 2010 that requires the potential wholesome water consumption by occupants of new dwellings to not exceed 125 litres per person per day. The Code for Sustainable Homes aims to reduce the daily water usage from 150 litres to 80 litres per person and in turn decrease the amount of energy used to treat and transport mains water.

What size and where

Housebuilders need to take into consideration a number of things when deciding upon the size of tank to be installed. Average local rainfall combined with the amount of available roof space and type need to be considered while volume of non-potable water used by the household is also an important factor. Although rainwater-harvesting systems can be a great retrofit choice, installations are easiest in new builds or extensions as it causes less disruption. Another positive for the self-builder is that a rainwater system doesn’t require any direct planning permission, in fact its inclusion in plans can prove significantly beneficial in getting the planning application approved as it saves on mains consumption and can contribute to alleviating flood threats.

For some time people have been installing the typical 200-litre water butt in their gardens in a bid to collect rainwater for outdoor use. As quickly as these butts can fill up and overflow in heavy storms they can be emptied by filling just 20 watering cans therefore larger collection tanks are required to make the process of rainwater collection more effective. The larger tanks range in size from 2,000 litres to 7,000 litres, and obviously provide more security when it comes to water supplies in long dry spells. Larger tanks also allow the high volume of rainfall on the roof of a house to be collected and with the average family homes roof experiencing 10,000 litres of rainfall in a short, heavy storm the potential collection is huge.

Traditionally there have been two options for storage tanks, above ground tanks or underground tanks. Above ground tanks provide a cheaper alternative because they have an easier installation due to not needing holes to be dug. The underground tanks have long term advantages in that they take up less space so causing little disruption and they keep the rainwater cool and fresher. These tanks can then be connected to either direct or indirect supply systems that involve electric pumps initiating the flow of water to the water pipes within the house. A direct feed system involves a pressure sensitive pump in the storage tank that maintains pressure on the rainwater pipes typically to toilets, washing machines and outdoor use causing the pump to activate whenever water is drawn. The indirect gravity feed system involves the combination of the main storage tank supplying a header tank in the roof space that then uses gravity to feed water into the pipes. However, finding space can be problematic and there are new systems that combat this by using rain catchers placed upon the roof to directly feed into storage tanks fitted in the unused roof space that allow for large volumes of water to be held. The water is gravity fed into the house so electric pumps are eliminated. 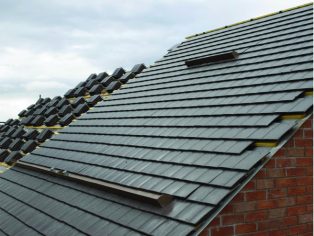 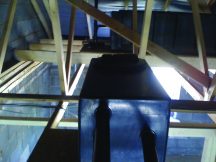 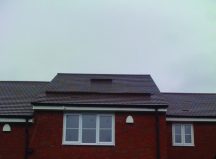