The numbers of homes granted planning permission are now higher than before the 2008 economic crash, latest figures show.

Housing Minister Brandon Lewis said that this demonstrates how government efforts are working to keep the country building. In the year to March, councils across England granted permission for 261,000 new homes – the highest annual total for 8 years.

“The previous system of top-down targets built nothing but resentment. Our reforms, a key part of our long-term economic plan, have changed that.”

“It means that permissions have been granted on 261,000 homes in the year to March – higher than the pre-recession peak in 2007 – while housing starts are more than double what they were 6 years ago.”

“And with the Housing Bill set to include measures to bring forward brownfield sites, we’re determined that we will keep the country building while protecting the green belt.”

Local support for housebuilding soars
The 2008 crash devastated the housebuilding industry, and led to the loss of a quarter of a million construction jobs.

That’s why the government has placed housebuilding at the heart of its long-term economic plan.

This includes radical reforms to put power directly into the hands of local people over the future development of their area, by putting local plans at the heart of the planning system.

Already, 64 percent of councils have adopted a local plan – compared to just 17 percent in May 2010.

The forthcoming Housing Bill will go further, and will include measures to create a new register of brownfield land to help fast-track the construction of new homes on previously-used sites near existing communities.

And with more than 1,500 communities across the country having applied to have their neighbourhood plan designated, the Bill will also include measures to streamline and speed up the process so even more areas can follow suit. 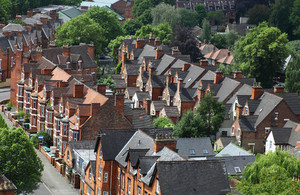