Pride pays off for Hedley

A commitment to quality has earned an Oxfordshire based site manager a top industry award.

Hedley Jackson, who oversees construction of new homes at Asquith Park in Sutton Courtenay, is one of 18 Redrow employees to receive Pride in the Job ‘Quality’ Awards from the NHBC (National House Building Council). Around 15,000 site managers undergo the judging process with just 450 winners selected.

Hedley, 32, who lives in Bletchley, said:

“This is my first win and hopefully the first of many,

“It shows that my hard work has paid off. It’s something I aspired to achieve since I was an assistant site manager.

“The award is good for the moral of everyone working on site and I’ve thanked each contractor personally for their hard work. It also offers a reassurance to customers that they are buying a quality home that’s finished to a high standard. I’m a diligent site manager and check everything thoroughly.”

Launched in January, Asquith Park is a 64-home development featuring designs from the sought-after Heritage Collection.

As site manager Hedley is responsible for overseeing the 45-strong team of construction workers.

Hedley has worked in construction for 11 years, initially as a materials controller before becoming an assistant site manager and then a site manager. He joined Redrow two years ago.

“I’d worked with construction director Bill Cairns previously and, when he showed me the showhomes at Scholars Place in Hardingstone, I jumped at the prospect to work for Redrow as it’s such a prestigious company.”

Judging for the Pride in the Job Awards begins a year before the announcement of the first round of winners. It includes spot checks of the day-to-day running of their site, plus assessment across 38 areas of site management, including their technical knowledge, consistency in the build process, leadership and organisational skills.

Only site managers who demonstrate exceptional standards in every aspect of their work on site and in the homes they build are considered for a Pride in the Job Award.

Hedley and the other ‘Quality’ Award winners will now have to wait until the autumn to discover if they’ve made it into the top 130 site managers to secure the coveted ‘Seal of Excellence’. 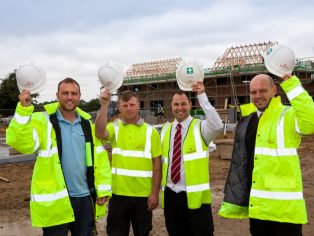