With flexibility and functionality as key drivers, Bond Bryan Architects designed a state of the art autopart manufacturing facility which allowed for future expansion on demand. Sébastien Reed reports

Magna International is a leading automotive supplier with 327 manufacturing operations and 100 centres spanning product development, engineering and sales across 29 countries employing 161,000 people globally. As part of an ongoing strategic expansion, its new Telford manufacturing facility was created to supply the nearby Land Rover Jaguar factory with advanced lightweight aluminium castings – a key building block in next generation all-metal and multi-material vehicle architectures.

Appointed to design the facility were Sheffield-based Bond Bryan Architects, selected on the basis of their extensive experience delivering schemes for the advanced manufacturing sector and their wealth of connections to other relevant design and engineering expertise.

The client based its brief around the design of an existing factory in Soest, Germany, but the architects identified significant areas where it could be improved upon – particularly in that the manufacturing process that would be housed in the new facility had developed considerably in the time since the factory’s construction. This, along with a brief mandating a flexible and functional building, provided a window of opportunity for the architects to develop a robust typology, and demonstrate creative architectural solutions.

Duncan Hogg, associate at Bond Bryan Architects and project lead on the plant’s design and delivery. “It was unusual for Magna to undertake such a project on a greenfield site,” he says, citing regular conference calls with Magna representatives in the UK, Canada and Germany. “So, everybody from the board to senior management was interested in how the project and design would emerge.”

The client and architects formed a consensus on what was physically required from the project. This comprised a triple-height foundry area playing host to a significant portion of the production flow, a shipping point, flexible office area, social facilities, stores, welfare accommodation, and finally car parking for staff and visitors, bicycle parking, and smoking shelters.

Informed by a series of detailed studies and mock-ups, the proposed scheme placed the entrance to the facility at the previously agricultural site’s northern elevation, close to an existing roundabout that would provide access to shipping vehicles. On the colossal 17,000 m2 foundry’s northern side, the two-storey office area and entrance to the facility are delineated by a canopy overhang spanning the building’s width, and which also protrudes over the edge of the staff car park offering some protection from the elements.

“The layout of the building was centred around the production hall and its ability to be extended to the south of the site,” explains Hogg: “The shipping area has
been kept to the west of the production hall with the offices taking prime position to take advantage of the views over the surrounding areas to the north.”

Beyond capitalising on the green vistas, justification for the resulting layout is supported further by the entrance’s – as well as the car park’s – proximity to the roundabout plus the placement of a shipping road into the site, facilitating the transportation of goods in and out.

“The location of the building also worked with the existing topography to ensure the most economical cut and fill exercise was achieved,” Hogg explains. “It’s a huge site, and there was a balance that needed to be struck between positioning the building, and avoiding having to excavate too much material and dispose of it offsite.”

“The manufacturing process basically comprises of melting ingots of pure aluminium, and feeding them into to a casting machine within an enclosed conveyor,” says Hogg. Commercial sensitivity was an obstacle to the design process, with the client being necessarily opaque on the details of the die casting process – it being key to their commercial edge over their competition.

While teasing out the requirements of the working environment, Hogg picks up that “it was more of a high-level brief in terms of the spatial requirement for operation, maintenance and installation of the machines that would inhabit it.” He adds: “It’s quite difficult designing and coordinating a building around a process and product that is commercially sensitive.”

With the building designed to house some of the largest die casting machines in Europe, structural measures had to be taken to ensure that the foundations
could support the equipment’s significant weight. The shipping doors also had to be large enough to accommodate the transportation of the machines into and out of the building.

One of the key challenges to deal with was the presence of the foundry’s three 63-tonne cranes within the foundry. Hogg explains that their movements had to be carefully factored into the design of structural, mechanical and electrical services in order to ensure no clashes occurred during their operation.

The requirement for the facility to offer flexibility as its output grows in future – a recurring theme in Bond Bryan’s design – translates into a hall big enough for five more machines on top of the three already featuring in the building handed over to the client. In addition, the structural, mechanical and electrical systems are designed to facilitate extension of both the foundry and the office space.

However in terms of the immediate constraints, Hogg asserts: “Containing molten aluminium is paramount,” and with good reason – if molten aluminium comes into contact with anything with any moisture content, it explodes. While the latest tech in aluminium die casting removes much of the risk from the process itself, using physical barriers, sounding beacons and coloured wayfinding on the floor to demarcate forklift and pedestrian routes help to safely regulate flow of personnel around the facility.

Among the many challenges facing the architects, the most prominent for Hogg was ensuring that the emerging design and specification choices would meet the requirements of Magna International’s commercial property insurer FM Global. It was essential that the building meet restrictions in terms of weathertightness, non-combustibility, and other factors.

An example of how the architects met the stringent insurance requirements and achieved the insurer’s approval was in their specification of a siphonic rainwater drainage system over the traditional gravity-fed solution. Using a siphonic system, fewer downpipes are necessary and can be placed at more flexible intervals throughout the facility. With forklifts and cranes operating inside, less downpipes means less chance of interference and, in turn, reduced potential of water leakage and the potentially damaging consequences.

The office area is situated at the front of the building over two floors. In line with the project brief which emphasised the importance of natural light, the office and plant areas benefit from full height glazing, concurrently cementing visual connections with the outdoors. The canteen area nestled within the building’s front section is also illuminated naturally in the day through expansive glass curtain walling.

presents inevitable design challenges to solve. A non-combustible and acoustically absorbent wall construction was specified to separate the foundry and office accommodation, with secure visibility in to the production area maintained by fitting steel roller shutters to any glazed screens which automatically roll down in the event of a fire. Hogg says: “This was a cheaper solution than using fire-resistant glass, and thus allowed us to maximise areas of glazing to maintain visual connection between operations within the offices and the foundry”.

Breaking down the scale

With its colossal size (the section housing the foundry alone is over 200 metres long and 16 metres floor to parapet), a concerted effort was made by the architects to shrink the building’s apparent size and reduce the visual impact of its immense scale within its rural context. The introduction of the two- storey office jutting from the main hall – as opposed to integrating it into the production hall itself or using a mixture of more intricate protrusions to accommodate the office function – represents a happy medium. According to the architects, this configuration “allows the building to nestle into the undulating landscape and harmonize against the skyline” negating the need for small additions to the building which might cause visual confusion. Ridding the design of any complex massing hierarchy also helped to serve the client’s future flexibility mandate.

Rooted into a concrete plinth running around the perimeter walls, the building’s external envelope is a patchwork of vertical cladding panels with apparent horizontal breaks which “allow the elevation to be broken down into smaller zones”, scaling it down and providing a natural break in the roof’s parapet line.

A mixed palette of greys form contrasting stripes up and down the facade, which firstly, “reduce the overall mass and potential monotony of the building’s appearance” and, secondly, provide a better platform for a seamless transition between original building and any future extension. With the client focused on the functional adaptability of the building to the production process, Hogg and his team found themselves frequently exploring opportunities which appeared, at first glance, somewhat removed from a sole focus on production efficiencies.

Hogg notes in the light of this how Bond Bryan helped to develop the client’s preconceptions of the project towards a more fruitful outcome. In the project’s incipient phases, the client provided a basic model of the building, taking the form of a more traditional portal frame with horizontal bands of glazing around the production hall. The architects created a more contemporary form and rotated these glazed ribbons upwards to better harmonise with the vertical direction of cladding. Not only did this fit aesthetically, but, as Hogg explains: “It’ll help natural daylight permeate further into the deep plan building, and provide views of the external environment for the workforce – something you don’t see very often with a factory building.”

The facility presents a sleek face: vibrant red cladding on the underside of the canopy contrasts with more sober greys elsewhere and ties in with the client’s branding. This together with the logo mounted on the wall conjures a sense of arrival for both staff and visitors, developed further with carefully selected greenery and landscaping. Various sustainable drainage systems were also integrated into the scheme, such as reten- tion ponds and swales, delivering the project’s large hardstanding, and its required surface water runoff rate.

While certifications for energy efficiency were not pursued for the building – its function being energy intensive by nature – there was a keenness to enhance the sustainability of the project where possible. The building was opened to natural light as much as reasonably possible to offset artificial lighting, bearing in mind the need to maintain security and confidentiality of the die casting process.

The project was strictly value engineered and completed under budget, meriting a letter of praise from Magna International’s vice president written to the architects. Precision-designed but inherently allowing for expansion, the facility demonstrates the company’s confidence in the economic sustainability of its business in this location. With reports showing UK manufacturing

at a 30-year high, Bond Bryan’s assured design should be an instructive example for architects required to offer forms which adhere firmly to present function, while future-proofing upwardly-mobile clients in this sector at least. 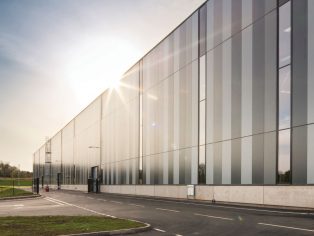 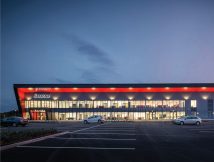 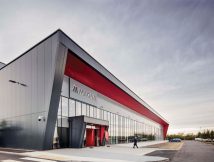 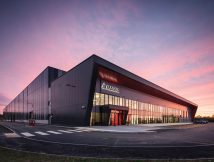 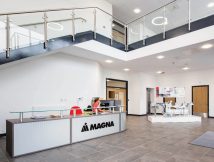 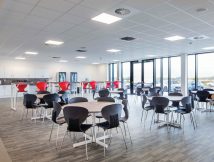