Pozzoni was presented with its award at a glittering gala dinner at the Hotel Football, Old Trafford in the company of fellow architects, engineers, interior designers and many more from the property sector.

Grafters is the only organisation solely dedicated to celebrating the North West construction industry and bringing companies from across the industry together at various networking events throughout the year. The organisation launched in October 2012 and held its first awards night in March last year.

“We are absolutely thrilled to have won the best overall architect practice award, especially as the winners of the Grafters Awards are decided by public vote and fellow ‘Grafters’ members.

“It’s always great to be recognised for what we do and this award reflects the hard work and effort displayed by the Pozzoni team. On behalf of Pozzoni, I’d like to thank everyone who voted for us, we really appreciate all of your support”.

Online voting for the awards opened in February 2015 for all of the 24 award categories and over 23,000 votes were received.

With over thirty years’ experience, Pozzoni has built up an impressive portfolio of public and private sector developments including offices, industrial, education, retail, housing, leisure and care projects from its offices in Altrincham and London. 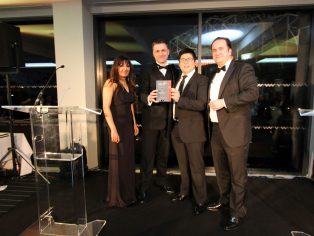