Disused land opposite Leith’s Ocean Terminal will finally be revitalised following the approval of a long-running brownfield development.

Ambitious proposals for “Waterfront Plaza”, which were strongly backed by local community and business leaders, were given the green light after Councillors voted unanimously in favour at the Hearing.

CALA Homes (East) is now hoping to begin construction of the 388 homes as early as summer 2018 with fist completions late summer 2019 – along with 1500sq.m of flexible workspace units similar to The Arches, Market Street.

As well as the major economic benefits and the creation of a public realm, a wide range of the local housing supply will be boosted, with 97 affordable homes also included in the plans.

“We are thrilled to have received the backing of Councillors who recognised the importance of bringing much needed new homes to the area.

“This derelict site is well-known to local people and we hope to ensure that our plans bring a notable boost to the local economy and contribute to a vibrant community.

“We’ve also worked closely with the community and leading local figures to ensure that the commercial units the site will create are in keeping with demand – bringing opportunities designed around Leith’s leading creative industries.”

In the week leading up to the Hearing at The City of Edinburgh Council Development Sub-Committee, a joint-letter was issued on behalf of high-profile backers, including Port of Leith Housing Association, Leith Chamber of Commerce as well as Ocean Terminal and 41 of its businesses.

The letter “strongly urged” support for the residential-led proposals located on historically disused land opposite Ocean Terminal, citing the urgent need for new private and affordable homes and the huge potential boost to the local economy.

Further public backing came from local Councillor Gordon Munro, who called the project a potential ‘catalyst’ for the regeneration of Leith – as well as the vocal support of Lord Provost Frank Ross, Gavin Barrie and John McLellan.

It is anticipated that an eclectic mix of ‘workspace’ units complimented with the proposed public realm, to include an urban square and public green space and café building fronting Victoria Dock at Waterfront Plaza will draw more visitors to the area and keep them there for longer, in line with local ambitions to increase the retention of visitors in Leith.

The Hearing to consider and determine the application was held at The City of Edinburgh Council Development Sub-Committee on 13 December 2017.

CALA Homes is headquartered in Scotland and employs more than 850 people and earned its reputation on the high quality of the homes it builds, which are sensitively designed to augment the areas in which they are located.

The result is homes that are highly sought after and which retain their value over decades, earning loyalty from owners, who often live in a series of CALA properties. 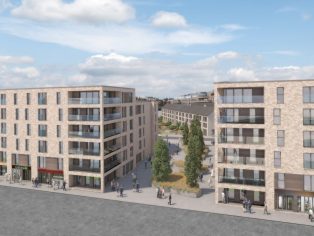