Proposals for a new development of 333 new homes in Peckham by Notting Hill Housing (NHH) have been approved by Southwark Council.

Situated on a derelict brownfield site, close to the town centre, the new development will include 117 new affordable homes (35%).

The project is the third NHH regeneration scheme in the borough, which will see more than 800 homes in total developed over the next three years. NHH’s other developments in Southwark include Grange Walk in Bermondsey and Edmund Street in Elmington.

The latest project aims to transform the former site of the Wooddene buildings which were demolished in 2007. In its place a new community will be created; in addition to the new homes, the proposals outline plans for retail space, landscaping and open green space with private and communal garden areas and a community pocket park. Improvements will also be made to surrounding areas and public spaces including Queens Road and Hollydene. This latest wave of regeneration means that Peckham is quickly catching up to its developed counterpart, Peckham Rye which has experienced significant renewal over recent years.

“We’re pleased to see our partnership with Southwark Council flourishing through this exciting project and look forward to working with them to deliver the much needed affordable housing in the borough. Investment over previous years has shown the potential of the borough; the neighbouring area of Peckham Rye is a testament to what can be achieved. This is a very exciting regeneration project for all involved and we look forward to continue working with Southwark Council to its realisation.”

“When there is such demand for housing in Southwark, it’s a terrible shame that a prominent site like Wooddene has sat empty for such a long time. I’m really pleased that we’ve found a developer who has ambitious plans for the area, and is also committed to providing the affordable housing that many of our residents really need.”

The NHH team consists of planning consultants, GVA, and architects, Jestico and Wiles whose clients include world famous brands such as Hilton International. 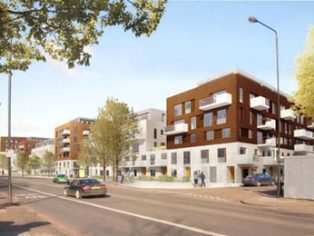