Situated on the North West Cambridge Development, north of the future local centre and south of the gardens marked by the Veteran Oak tree, the designs for 73 one and two bedroom apartments play an important role in the establishment of the Local Centre community, providing a critical mass of University affordable housing alongside other residential buildings and social amenities.

The proposals by Maccreanor Lavington Architects and Witherford Watson Mann Architects, with Grant Associates designing the courtyard landscape, include three connected buildings of varying heights and two courtyards which make use of careful detailing and robust materials to reflect accommodation that would be familiar in Cambridge’s existing centre. The area includes a strong perimeter to the surrounding public spaces, which address and respond appropriately to the changing external conditions moving from the urban market square along the main cycle and pedestrian route to the more pastoral Veteran Oak Gardens.

“The architectural designs by Maccreanor Lavington and the 2013 Stirling prize-winners Witherford Watson Mann sensitively reflect the urban and village qualities of the future surroundings. This response and style of architecture reflects the vision for the development, which is to create an urban extension to Cambridge and we are thrilled that the local authorities continue to support the designs for the North West Cambridge Development.”

Works on the North West Cambridge Development infrastructure will start in 2014 with phased completions from 2016. 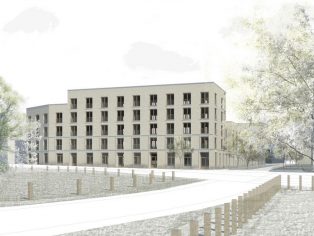