Pioneering autism centre is the UK’s ‘Project of the Year’

Over 90 of the UK’s most outstanding and community beneficial property schemes went head-to-head for top national accolades at the RICS Awards Grand Final, where the UK’s first purpose-built centre for the diagnosis, support and research of autism took the esteemed UK Project of the Year title.

The prestigious annual contest – hosted by Samira Ahmed, journalist and BBC broadcaster, and held at the Royal Lancaster Hotel in London on Friday 4 October – celebrates the UK’s most inspirational built projects that are having a significant positive impact on the communities they serve.

The £18million Caudwell International Children’s Centre (CICC) set in the grounds of Keele University in Newcastle-under-Lyme (West Midlands) won the national Design through Innovation accolade, before gaining the overall UK Project of the Year title for demonstrating outstanding best practice and proving to be of monumental benefit to its local area and wider economy.

The innovative autism centre is transforming the way people with autism in the UK, and their families, can be helped whilst also helping to dramatically reduce the waiting time for a diagnosis.

With a stunning ‘butterfly’ shape roof, the CICC offers inclusive design and sensory features – including curved corridors, colour changing lighting and acoustic control measures – to reduce anxiety flares for visitors with neurodivergent conditions. It is also attracting worldwide talent in the field of autism thanks to its pioneering research and diverse range of support services for those with autism.

Earlier this year the landmark building won the Design through Innovation category award as well as the Project of the Year, West Midlands title at its regional RICS heat, which led to the project being automatically entered into the national RICS Awards, Grand Final.

RICS Grand Final Judges commended the project team – Buckingham Group, C4 Projects, KGA Partnerships, Tier Consult and the CICC – for their collaborative and co-ordinated approach to deliver what they described as an inspirational building of distinction, on time and within budget, whilst exceeding UK accessibility and sustainability standards.

“The average waiting time to be assessed for autism is at least two years, but the CICC aims to help families get a diagnosis within just six weeks. This allows the CICC to provide vital early support services to children with autism and hope for thousands of families that may otherwise have had to wait years for a diagnosis and help in understanding their child’s behaviour.”

He adds: “Good building design and innovation should be the catalyst from which other benefits follow. The CICC is clearly improving the lives of thousands of children and their families, whilst improved educational and employment prospects have helped deliver significant social and economic benefits. The project also has a growing reputation as a centre for research excellence and setting new national and international standards for inclusive design, adaptability and construction, making it a standout UK Project of the Year winner.”

The winners of the eight national RICS Awards are as follows:

“The Judging panel and I were enormously impressed by the vision, skills and collaborative approach of the teams behind these winning projects. Their talent and united team approach has resulted in exemplary and innovative schemes that have been hugely well received by the public and really do represent the very best built projects in the UK.”

“Each of the winning projects is having a profoundly positive impact on their local area. Therefore, the teams behind them should be incredibly proud of the part they have played in helping to improve their community and wider local economy.” 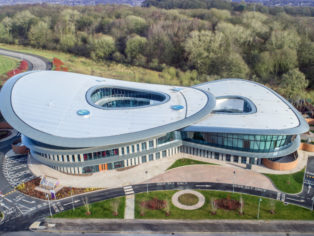