Christopher Christophi, an associate in Perkins+Will’s London studio, has won the BCO (British Council for Offices) NextGen Rising Star Award for London and the South East, surpassing some of the industry’s most outstanding young professionals.

Christopher was awarded the prestigious prize due to his strong sustainability credentials and project portfolio, which includes Perkins + Will’s first built UK project, One Station Square, a 142,000 sq. ft. mixed-use commercial development in Cambridge rated BREEAM Excellent. As Project Architect and architectural BIM manager, Christopher led the development of the Revit Model and the scheme’s coordination with the wider design team from inception to completion.

“Christopher’s passion for architecture extends beyond his working day. He regularly participates in design competitions and his work has been published and exhibited internationally, including at the Royal Academy of Arts and in a number of respected design and media publications. His professionalism and commitment has secured his reputation as a future industry leader, and we’re proud to see this recognised at one of our industry’s most esteemed award ceremonies.”

Following the successful delivery of One Station Square, Christopher is now leading one of Perkins + Will’s architecture projects, 150 Holborn, a 185,000 sq ft commercial HQ building in London. He holds a LEED Green Associate accreditation and assists Perkins + Will’s Head of Sustainability on its annual IS0 9001/14001 accreditation. Christopher has also been instrumental in the implementation of projects using Revit and BIM using his experience from One Station Square’s delivery.

“I feel extremely honoured to have won the BCO NextGen Rising Star Award, which is an important industry programme that recognises and supports the next generation of young architects in the UK. I have had the most incredible opportunity to work on some great projects throughout my career and It feels fantastic to be recognised for my achievements and hard work to date.”

The BCO’s NextGen Awards is an industry wide programme highlighting the achievements of young professionals in the commercial sector. Held annually, it forms part of the BCO’s NextGen programme, which sets out to mentor and encourage the next generation of professionals to become future leaders in the industry, while providing a platform for new talent to share their ideas. 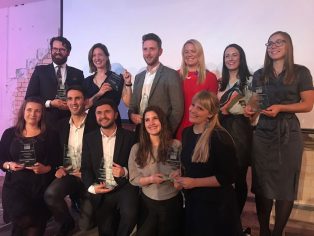