The World Architecture Festival (WAF), the ‘Oscars of architecture’, launched its 2016 programme in Dubai this week with its first ‘satellite’ event outside of the UK. Following four successful years in Singapore, WAF will this year be moving to Berlin, Germany.

Entries for the 2016 edition of the WAF awards close on the 19th May. Attracting over 750 entries each year, shortlisted projects compete across 30 categories to be named the World Building of the Year and Future Project of the Year respectively. The festival will take place in Berlin between from 16 – 18 November and is annually attended by over 2,000 delegates. Architects from around the world are invited to submit both their completed and forthcoming project for the world’s premier architecture award.

WAF Dubai marks the first in a new series of satellite events that will be hosted around the world enabling a global celebration of architecture throughout the entire calendar year. The event included speakers from major practices including Francis-Jones Morehen Thorp, Allies and Morrison, Perkins+Will and Fletcher Priest Architects.

Featuring an in-depth talks programme on the topic of ‘Architecture and identity’ and an exhibition of 2015’s award winners as well as regional finalists, WAF Dubai attracted 300 guests over two days.

“WAF Dubai is our first overseas regional satellite event, and will I hope be the first of many. Where people find it difficult to travel to our main event, this year in Berlin, we will travel to them, promoting ideas about architecture across the globe.”

The 2015 awards were claimed by some of the world’s biggest architects as well as emerging talent with the World Building of the Year going to OMA/Buro Ole Scheeren for The Interlace and Bjarke Ingels Group receiving the Future Project of the Year for Vancouver House. 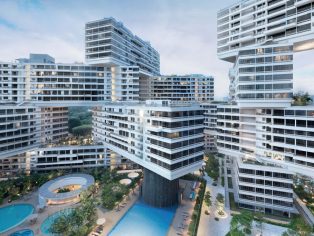 World Building of the Year 2015, The Interlace by OMA/Buro Ole Scheeren