There are now two museum buildings, not one, at the Kimbell Art Museum in Fort Worth, Texas. A light-filled concrete and glass pavilion designed by world-renowned architect Renzo Piano opens Wednesday, November 27, across the lawn from the Museum’s original home, Louis I. Kahn’s modernist icon of 1972.

Selected masterworks from the Kimbell’s permanent collection, including old master paintings by artists such as Michelangelo, Caravaggio and Rembrandt, and superb examples of Asian, Precolumbian and African art, will inaugurate the Renzo Piano Pavilion. The European works will remain on view through only January 12, 2014, before returning to the galleries of the Louis Kahn Building. Admission to the permanent collection is free.

At the same time, the Kahn Building will showcase other works from the Museum’s collection, including paintings and sculpture by such masters as Monet, Degas and Cézanne, and The Age of Picasso and Matisse: Modern Masters from the Art Institute of Chicago, an exhibition presenting many of the nation’s most renowned modern European paintings outside their customary setting in Chicago. Kahn’s icon of modernist architecture will itself be in top form, having undergone a thorough restoration over the course of the last year.

Designed by the Renzo Piano Building Workshop (RPBW) and Kendall/Heaton Associates, the Piano Pavilion is located 65 yards to the west of Kahn’s signature cycloid-vaulted museum. The two museum landmarks in turn occupy the heart of the Culture District of Fort Worth, whose seven museums are visited by more than two million people a year and include the Amon Carter Museum of American Art, the Modern Art Museum of Fort Worth, the Fort Worth Museum of Science and History, and the National Cowgirl Museum and Hall of Fame.

Renzo Piano is the acclaimed designer of Europe’s tallest building, The Shard in London, and a number of other of the world’s most beloved buildings and museums in such cities as Paris, Amsterdam, Bern, New Caledonia, Venice, Oslo, Houston, Dallas, Atlanta, San Francisco and Boston. 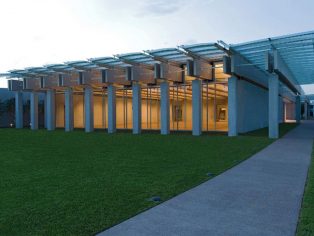