The Oleg Klodt Architectural Bureau has created new interiors for an apartment in an historic Moscow building dating back to the turn of the twentieth century. The new decor is eclectic, a synthesis of contemporary American loft living with the style of an old-Moscow house, fitted out with high-end furniture. This is now an apartment perfectly suited to the lifestyle of its creative bachelor owner, down to a newly added music studio. However, it is also a very comfortable space where the greatest of attention has been paid to every centimeter of space and, importantly, it can be easily transformed into a family home in the future.

The client purchased the apartment in downtown Moscow after its initial renovation. However, he wanted to take the recreation to the next level by highlighting the history of the property and making its design striking and noble. The apartment is within a historic building which was once owned by a neighbouring church, and he wanted to draw attention to this period, whilst also making it a fashionable and upscale living space.  The owner enjoys listening to music, has a nightclub lifestyle and his hobby is mixing music and DJ-ing so he wanted the ethos of his apartment to reflect this aspect of his life, and to have elements of a music studio about it. At the same time, since the apartment was to be his permanent residence for an indefinite period, the client wanted the inherent possibility of easily transforming the bachelor apartment to a family residence at a later date.

This raft of varying requirements from the client resulted in an interior that is both balanced and eclectic, and keeps a foot in differing worlds – from an eye-catching, practically domestic space it must be capable of turning effortlessly into a party space.

From the very outset, the designers decided to preserve the interior’s early 20th century style. The apartment has an exit to the roof of the building, with a wide veranda that has a great view of old Moscow. The intention was to reflect this classic view in the interior.

The designers rearranged the floor plan into a large open-plan space incorporating the living room, dining room, kitchen and entrance hall. The only walled space is the bathroom.  The location of the bathroom helped to create two niche spaces, and separates the entrance hall and kitchen from the open-plan living and dining area.  A particularly contemporary decision in the process lay in creating a mirror wall to conceal the prominent bathroom. A conventional mirror wall would have been possible but the designers thought it would appear mismatched, so they placed an antiqued mirror on the wall which is in harmony with this building.

From the beginning, the decision was made to preserve the original brick walls. These were reconstructed where necessary and all existing bricks were cleaned before they were treated with a mat varnish and some sections painted.

Since the goal was to give the interior a traditional and calm atmosphere, the designers combined neoclassical styling with this modern envelope. The idea was to future-proof the interior against any changes in the client’s personal lifestyle over time. The decor of the music studio can be simply replaced by other fixtures and fittings.

Traditional furniture is juxtaposed with modern furniture and specially designed features are combined with the brick walls to achieve a harmonious whole. The abundance of custom made furniture, crafted by Oleg Klodt, helps to achieve this comfortable harmony.

The door which leads to a cloakroom presented a challenge. The designers hoped to conceal this door, as it is situated near the entrance door and the beautiful doors leading to the study room and bedroom.  Since it was set into a brick wall, they decided to clad the door with sliced pieces of the old brick that had been extracted from the wall.

The old walls and pipes have become distinguishing elements in the design. The iron radiators, flue doors, heating pipes and brick walls were left in place, and unaltered as far as possible. In addition, some new elements, such as doors, were specially made to replicate these old Muscovite features.

The panoramic view from the window to the church façade and, beyond, of the old Moscow buildings is breathtaking. The designers wanted this view to be the star of room so they created a podium in the living room, which makes a functional entrance to the veranda, and shelves for books and CDs. The podium also forms the perfect centre piece for a great party since it can be used as a stage with the DJ stand. The stand was designed by Oleg Klodt for the client, and the closet can be used to store the DJ equipment; it is given the ‘star treatment’ by projectors situated in the corners of the living room.

Oleg Klodt’s designs are unique – they are crafted down to the finest detail. In fact, he creates many pieces himself, making them one-of-a-kind. For this particular project, Oleg Klodt designed a dining room lamp, a TV stand, bars, the closet for the living room, all the wardrobes for the cloakroom, the bed, and much more. All the built-in furniture and doors were also designed by Oleg Klodt.

A further design decision arose from concern about the colour of the bricks. If they were all left as red, the designers feared the result would be too industrial and inflexible in an apartment that was meant to be easy to change.  Their response was to paint some sections of brick in white. The old chimneystacks were left in their original state. The decision to paint some of the brickwork in turn led to consideration of the balance between red and white bricks in each area. Since bedrooms should be cosier, more neutral white bricks were preferred here than, for example, in the study where the main wall is red.

In the study, the design of the cabinet is imposing, the safe is in a traditional American style and the writing table design is austere. Meanwhile in the bedroom, all the furniture pieces were chosen for their soft, pastel colors. All the colors in the bedroom – olive, grey and turquoise – are selected from the same density of hue.

The designers reached for a variety of materials in the furniture: the bars are crafted from American hazel-wood; the TV stand is from teak, and the mirror from glass. In the study, the doors are crafted from whitened oak. In the bedroom, the bedcover is silk-sewn, the curtains are made from linen, and the bedhead is created from Alcantara while the lamp is crafted from dark rough steel and the floor is of oak-toned Wenge.

These materials were selected to achieve layers of texture that form a varied and interesting interior and an exclusive, one-of-a-kind ambience. This approach also suggests an extremely livable space that can develop over time and absorb new details.

“This was a very unusual project for me – my first loft interior. I enjoy working in different styles but what inter­ested me most about this project was the location – it’s one of the very oldest districts of Moscow, and the view from the win­dows is astounding. I’m against the idea of using things just for the sake of them – but here the old brickwork is already there and ‘native’ to the interior. We designed the interior around the contrast between the characteristic ‘loft’ elements (exposed brick and pipes, radiators, wooden floor) and the decorative elements of the interiors (desirable furniture, rich textures, and a consistent style).” 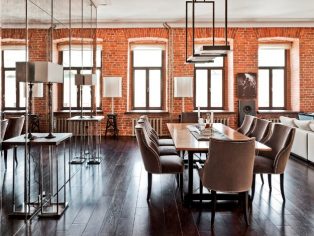