Office trends in our time: How our office landscape has changed over the decades

The first offices — rooms that were intended exclusively for working at desks — emerged around 1800 as work spaces for merchants, government officials and tradesmen.

By the early 20th century, only three percent of all employees held office jobs, while this figure in the UK today is around 50 percent. In 1856, a UK government report on office space layouts said that while separate rooms were necessary for intellectual work, “for the more mechanical work, the working in concert of a number of clerks in the same room under proper superintendence, is the proper mode of meeting it.”

The development of the office landscape was influenced by different factors and was often based on ideas from the United States. But the Oriel Chambers in Liverpool was the first skyscraper ever built, and importantly it was built using an iron framework meaning there was no need for walls. The workspace specialist Steelcase sheds light on the four crucial office trends, from open-plan offices to the home office to digitalization, and demonstrates the important role played by the UK.

Trend 1: Open-plan offices and the desire for low cost space

More than any other office format, the open-plan office represents effectiveness, productivity and efficient use of space. Open office structures found their way into U.S. businesses in the middle of the 20th century in order to manage the economic growth after the Second World War.

Organizations today focus primarily on progress, growth and innovation. They therefore continue to invest in open-plan offices, since they are supposed to be the best way to support collaborative and communicative work as well as shared learning.

The open-plan trend has gained much greater acceptance in the UK. Today almost half of UK offices are open plan – more than double the global average of 23 – according to Steelcase’s Engagement and the Global Workplace report. One reason could be that, businesses are eager to maximize density to control costs. Real estate prices in the UK, particularly in London, are high and so British businesses have become advocate of open plan configurations to utilize space.

The attempt to drive down costs comes at a price – workplaces can become overcrowded. The UK has more than double the number of nomadic workers at 17%, and falls short of the global average for having sufficient meeting rooms.

There is a misconception that all individual offices—and thus also the prestigious executive office—gradually gave way to the growing trend toward the open-plan format.

“The executive office still exists in companies around the world, and an executive’s status is usually defined by the size of his/her office,” confirms Marc Nicolaisen, Director of Customer Experience with the office specialist Steelcase. “In 1996, our management team moved from individual offices into open spaces, which was quite unthinkable at the time. Our former CEO James Hackett spearheaded this development in order to trigger a fundamental change in leadership culture. All executives have supported the decision to the present day.”

What Steelcase promoted at the time did not become common practice until today. A new generation of managers has gradually moved up in the ranks and they generally pursue a very modern leadership style. For Generation X and Y Millennials, status and traditional hierarchies tend to take a back seat, while network-based structures and information communication on an equal footing is becoming more and more important.

Trend 3: Well-being at the office

After several decades in which (space) efficiency was considered the primary measure of things, a reverse trend began at the beginning of the 21st century. In particular, employees and came to understand that open-plan offices were not a one-size-fits-all solution for greater productivity. They began to focus more attention on ergonomic aspects. The battle over skilled workers that arose during this period also played a crucial role. To attract the best talent and develop loyalty, companies emphasized the idea of well-being more than ever before in the way they organized their workspace.

As early as 2005, Steelcase introduced a leadership community with closed-off oases and a large number of different rooms. The office experts were far ahead of their time. The European trend of focusing on people and their well-being didn’t arrive in America until some 10 years later. The main reason for this was the large number of permanently installed cubicles, which made it impossible to flexibly create new rooms or secluded areas.

The UK has led the charge for well-being spaces. 71% of UK workers said their workplace has a relaxation area – the highest score in the Engagement in the Global Workplace study, and way above the global average of 45%. The UK also has more private space at work than the rest of the world.

Trend 4: The home office as a result of digitalization

The next wave of trends came approximately 10 years ago during the course of digitalization. As technological aids such as smart phones and laptops made it increasingly more possible to work on the go, more and more employees demanded this freedom and flexibility. The result was the home office. Uninspiring and cramped open-plan offices made creative and innovative work more difficult, so that a growing number of people used the opportunities of digitalization and regularly took their work home or to a cafe. Over time, the UK adopted this idea, and last year it was reported that 1.5million people – a quarter of a million more than 10 years ago – were shunning the office for more flexible working lives.

What will the office of the future look like?

In the years to come, the use of technologies in the office of the future will go far beyond current possibilities. “People, workplaces and technology will become even more closely networked, thanks to sensors and the Internet of Things,” predicts Marc Nicolaisen. “At some point, the entire company will be linked and networked—from appointment calendars, furniture and the room booking system to individual employees and even the conference room.” The smart office will thus support users and organizations in their work in the best possible ways.

Steelcase has observed a fundamental change even in the way managers and their staff interact with each other.

“Managers are increasingly taking on the role of coaches and are not calling the shots as much functionally and in terms of content,” says Marc Nicolaisen, assessing the latest development.”

This change in management style is closely meshed with the spatial environment. The disappearing hierarchical executive offices, combined with more open areas where employees can talk and work together without complications, is what makes network-based collaboration with flat hierarchies possible. A variety of different rooms and work options is necessary for this purpose—the kind that Steelcase has been introducing within its own company since 2005 and among many customers since that time. 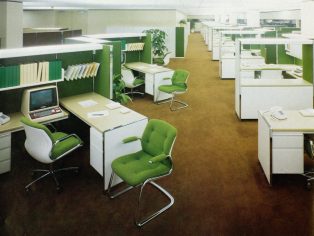 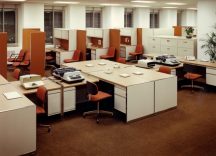