Property maintenance and refurbishment contractor Novus Property Solutions continues to invest in its young operatives, having announced the winner of its prestigious Apprentice of the Year award.

Paul Andrews, of Novus’ Cambridge office, was revealed as the winner of the annual award during a ceremony held at Stoke City Football Club’s Britannia Stadium. He won a cash prize and a donation to the charity of his choice, and will also attend events as an ambassador for Novus throughout 2015.

Paul, 20, was handed the award after taking part in a challenge day with six other apprentices, which saw them all assessed on their ongoing on-site performance, their performance during the challenge and during a formal interview with Novus directors.

He worked hard on the challenge day at the Root ‘n’ Fruit allotment in Stoke-on-Trent and impressed the site manager and training team with his initiative and attitude. Senior staff found that he came across as being very confident, committed, friendly, likeable and sincere – all of which helped him to win the accolade.

“I’m delighted to have been recognised for my hard work and good attitude and look forward to becoming a Novus ambassador in 2015. I’m proud to represent the company as we share the same values and mission and I can’t wait to help spread the Novus message in the community and marketplace.”

“The apprentices all performed well during the challenge day during which they made over a community allotment. Paul thoroughly deserves his title – we remain committed to investing in all of our staff members and look forward to seeing Paul’s career progress further with Novus.”

The Apprentice of the Year runner up was Glen Speight, of Novus’ East Midlands office, while James Riley of the Wrexham office was highly commended. Others who took park in the day were Kyle Park, Lewis Read, Tom Pearce and Martin Naysmith, who all made a lasting impression on the judges. 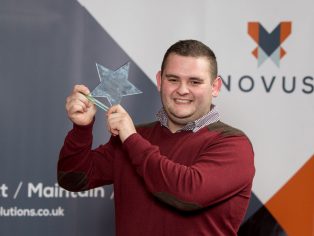