Novus Property Solutions has signed off its first year of a seven-year contract with Gosport Borough Council by delivering an eye-catching refurbishment to a sheltered housing scheme in the town.

The maintenance, refurbishment and new build contractor is contracted by Gosport Borough Council to undertake all external decorations for its properties, and completed its first year’s work three months within deadline.

This led to the council commissioning Novus to carry out a comprehensive, 12-week refurbishment of Alec Rose House, a sheltered scheme for residents over the age of 60. The scheme itself comprises of 17 self-contained flats supported by communal facilities such as laundry, lounge, garden and enclosed corridors linking all parts of the scheme for security and safety.

Residents were involved in every stage of the refurbishment, particularly at the outset where they were given the deciding vote on what theme the refreshed home would have after being presented with a number of options by Novus’ designers – they opted for a woodland theme to help create a warm, friendly atmosphere.

The project involved a number of noteworthy adaptations from Novus, including a striking transformation of the outside area. Previously, the area had been on split levels, making it difficult for people in wheelchairs to access it, but Novus resurfaced the entire area as a single level, allowing all residents to enjoy the space.

Working in a live environment often poses problems, but Novus has been complimented for its communication with residents, ensuring everyone knew what was happening through regular coffee mornings, as well as the constant presence of a site manager, who was on hand to answer any queries residents might have.

The refreshed scheme was officially opened by the former Mayor of Gosport in May, with Novus’ work proving so impressive that Gosport Borough Council are looking to commission similar works at another sheltered housing scheme later this year.

“It has been a pleasure to work with the team at Novus to deliver the refurbishment at Alec Rose. Novus was very driven in providing us with a top quality service and its attention to detail has been outstanding. The residents were extremely pleased with the newly refurbished communal areas. The icing on the cake was meeting Novus the Bear at the open event!” 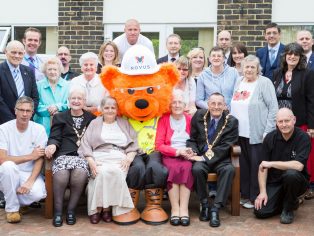