Norbord and RIBAJ announce winner of the prestigious Microarchitecture Award

Launched In April 2015, The RIBA Journal Microarchitecture Award, sponsored by Norbord, culminated in a prize giving ceremony in Central London where the winner and runners-up were announced.

The challenge was to look at the way that Cabanon was created – and emulate it using Norbord’s SterlingOSB panel product; to design an external living shelter from a kit of parts mainly made from SterlingOSB. The entries were to demonstrate SterlingOSB’s versatility, strength and sustainability credentials.

Le Corbusier designed and built the celebrated Cabanon in 1952 as a tiny vacation home at Roquebrune-Cap-Martin on the Côte d’Azur, retreating there every summer for more than ten years. He claimed to have sketched it out in 45 minutes. At only 3.6m², it is a miracle of compact design. It shows Corb’s adaptability in design, creative use of space and aesthetic simplicity.

Karl Morris, managing director of Norbord’s European Operations, said: ‘SterlingOSB is widely used in the construction industry. However, its aesthetics are often hidden in the building’s framework. We’re excited about the innovative designs that this competition has generated.’ Norbord has been delighted with the success of this RIBA competition and would like to thank everyone who has been involved; not least the architectural community. It has been a great way to celebrate the 30 year birthday of our Sterling OSB product.

It’s been 30 years since Norbord first pressed SterlingOSB at the factory in Inverness yet, despite having been around for three decades, it’s never lost its edge when it comes to strength and innovation. For this reason, 2015 has been a year of reinforcing the message; why it just has to be SterlingOSB for a whole host of general jobs and construction tasks. Strong, durable and incredibly versatile, SterlingOSB really does give plywood a run for its money – in fact, it goes a long way on a tight budget too, proving to be a cost-effective option for general trade tasks through to large-scale construction projects. 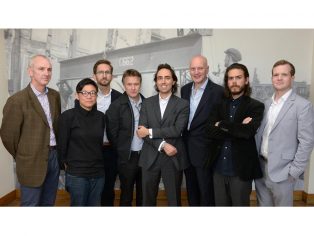