Restoring the historic ceramic mosaic floor in the game larder at one of the UK’s leading historic houses has been undertaken by National Federation of Terrazzo, Marble and Mosaic Specialists (NFTMMS) member JW Restoration.

According to Federation spokesperson Brian James, this exemplifies the quality of the skills and craftsmanship of NFTMMS members which can produce the most spectacular results.

The game larder, which dates from 1909, was used to hang game that was shot on the Estate.  It became derelict following the arrival of modern refrigeration techniques and was subsequently used to house chickens in the 1950s and 60s.

“We were specified for this project due to our expertise in mosaic restoration and our extensive experience of working within listed and historically important buildings. It proved to be a fascinating and challenging project but also one which was hugely rewarding.”

The initial report revealed that the large octagonal mosaic floor was missing large sections of ceramic tiles, called tesserae, and there was damage where the original internal metal work had been removed. In addition, the game larder had suffered from exposure to the elements for many years and acidic attacked from years of chicken waste.

“One particular challenge was matching the different coloured ceramic tesserae. The light and dark green tesserae proved the most difficult to match, but it was critical for all concerned that we achieve the closest possible fit to minimise the visibility of the restored areas.”

JW Restoration hand cut the tesserae to the correct size and appearance to match the original precisely. They worked from a rubbing of a section of the mosaic which allowed them to replicate the fan pattern of the original and the missing sections were then made in their workshop and transported to the stately home for the installation.

“Once the large missing sections were installed and grouted we were able to give the mosaic a non-abrasive deep clean to remove the years of organic soiling that had accumulated.”

The NFTMMS represents companies who wish to maintain and improve the standards of craftsmanship and technical control on which the industry depends. It includes companies involved in terrazzo, mosaic, marble, granite, limestone and quartz and NFTMMS members freely offer technical advice and assistance with specifications. Visit the website at www.nftmms.co.uk for more details. 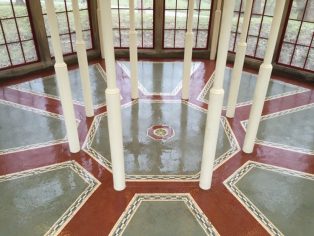