A new war memorial has been unveiled during a remembrance service at the former Saighton Camp in Huntington, Chester.

Marking the creation of the memorial on Highlanders Way, a remembrance service at St Lukes Church, followed by a parade formation by local uniformed groups and laying of wreaths, took place on Sunday, November 9.

The Duke of Westminster attended to lay a wreath at the site of the former military training facility, which is now being transformed into a new residential community by housebuilders Redrow, Bovis Homes and Taylor Wimpey.

Saighton Camp was initially used during the Second World War as a basic training camp for the army and latterly as a medical training facility for the Ministry of Defence.

The memorial is located at the main entrance to the Crown Park development to create a focal point in a prominent area. The design was agreed with Huntington Parish Council by the consortium of developers to commemorate the war effort. An apple blossom tree is at the centre of the feature and will be surrounded by seasonal flowers, including poppies. The base is surrounded by red brick and stone tablets with engravings including the words “Lest we forget”.

“Saighton Camp and Huntington have a rich heritage and association with our armed services. It is with great pride we can now honour the fallen of all conflicts and remember those who gave and continue to sacrifice so much.”

“It is humbling to see so many residents attend the memorial dedication on Saighton Camp. As new the houses are built they will eventually fully cover the area used by both the Army and Reservists. I hope the memorial will keep a lasting and important link with the camp’s history and become the focal point, in the years to come, to remember and honour those who took part in areas of conflict both past and present day.”

Area sales manager Sam Williams attended the service and dedication on Sunday on behalf of Redrow Homes. She said:

“Saighton Camp is an historic site which played a significant role in training troops during the Second World War. This memorial is a fitting tribute to that history and will take pride of place within the new community we are creating here.”

“We are very conscious of the history of the communities in which we build our new homes and we’re proud to play our part in creating this new memorial that marks the sacrifice and bravery of local people. The memorial both recognises this area’s past and looks to the future as it will grow, evolve and represent a focal point for this new part of the community, which is itself developing and taking shape.”

Hundreds of new homes are being built by the consortium of developers off Sandy Lane, including around 120 by Redrow and 227 by Bovis Homes, to add to those already built by Taylor Wimpey. 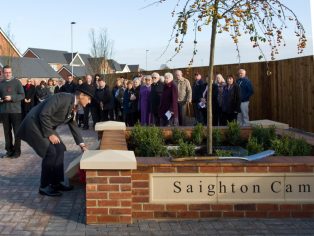 The Duke of Westminster lays a wreath at the new war memorial at the former Saighton Camp.