Few applications demonstrate the physical properties and practical benefits of SterlingOSB more graphically than the new Shred Skatepark (www.shredskatepark.co.uk) in the Scottish town of Ayr.

The brainchild of professional joiners and skateboard enthusiasts, David Hunter and Craig Maxwell, the new indoor skatepark occupies 10,000 ft2 of space at the Heathfield Industrial Estate. The ramps and curves were designed with help from professional skatepark consultants, Vision Ramps, and are made from two grades of SterlingOSB3 fixed to a softwood stud frame.

“This is the first skatepark we’ve ever built,” says David. “We looked at a lot of other skateparks and came up with our own design which Vision helped develop so it would fit into the building. At that stage, I noticed that nearly all skateparks use either OSB or sheathing ply.”

“I use a lot of OSB working in the building trade and I know how rigid it can be but also how flexible,” says David. “I’d basically decided on OSB, and when I asked Vision for their advice, they said ‘definitely – OSB is the way to go’. They should know as they’ve already built more than 10 parks!”

SterlingOSB is an engineered board product comprising thousands of softwood wafers resin-bonded together under high temperature and pressure. The orientation of the fibres gives the finished board optimum strength while allowing the board to flex without generating high internal stresses.

The ramps at the Shred skatepark use 18mm SterlingOSB3 as the main structural units, cut to the appropriate profile and braced together with 100mm softwood studwork. Two layers of 9mm SterlingOSB3 are used to create the actual ramp surfaces. Using two thin layers allows the tight radiuses to be formed easily.

“The 18mm OSB takes screws very well and very close to the edge of the board while the 9mm ‘beds’ extremely well,” says David.

Six-millimetre birchwood ply is fixed over the 9mm OSB to create a dead-smooth wearing surface for the ramps, says David.

“You need a hard, smooth, fast-moving surface and SterlingOSB has quite a rough texture,” he explains.

The plywood is sheeted over the OSB in a diagonal herringbone pattern, adding extra rigidity to the ramps. But otherwise it contributes very little in terms of strength.

“When you look at the finished ramp, you only see the plywood. But it’s the OSB underneath that’s doing all the work!” says David.

The flexibility of SterlingOSB came into its own when creating the compound curves at the corners of the ramps, says David

“We made this from 200mm strips of 9mm OSB sheeted diagonally and then finished them with segments which Vision called ‘petals’ of birch ply over the top.

The SterlingOSB was supplied by local Norbord distributor, MGM Prestwick. In total, the scheme consumed 227 sheets of 18mm board and 277 sheets of 9mm. 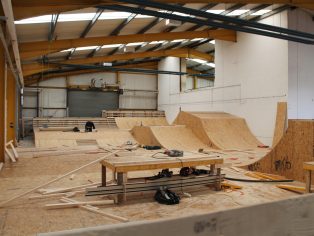