Chartered building surveyors Jonathan Cornes Associates has appointed Nick Bracegirdle as a surveyor. Nick’s appointment increases the workforce to a team of nine, with plans to recruit a further surveyor later this year. The move will result in an even stronger in-house facility in the adaption of homes for people with disabilities.

Nick graduated with a first class BSc (Hons) in Building Surveying from Liverpool John Moores University. Prior to joining Jonathan Cornes Associates (JCA), Nick specialised in the design and adaptation of homes for individuals with disabilities often resulting from personal injury and clinical negligence.

“We are already building a credible reputation for our adaptation service following several projects, including the design of a new residential dementia care unit in Leek, Staffordshire.”

“JCA is an expanding and ambitious company and Nick’s addition to the team significantly expands our knowledge and expertise in this area and will be of great benefit to future projects of this nature.”

“The move to JCA has given me the opportunity to get involved in a much wider range of projects.”

“For me, adapting homes for people with disabilities is a hugely rewarding aspect of my job. The client has to cope with the fact that their life has changed dramatically. My job is to design and adapt a home that not only meets their needs, but also gives them back some of their former independence. So far no two days have been the same, the breadth of work is incredible and it’s great working in such a diverse industry.”

JCA’s head quarters is in Stoke-on-Trent, Staffordshire, and the company has offices in Manchester, Birmingham and London. 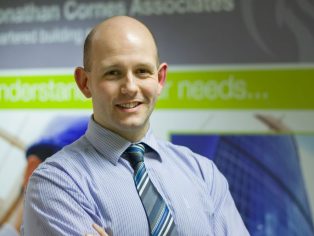