kbb Birmingham 2014 is well underway, and thousands of industry professionals have already descended on the UK’s largest kitchens, bedrooms and bathrooms event. The atmosphere amongst the aisles has been electric, and visitors have been amongst the very first people to get a glimpse of the latest ranges from the top names in the industry. Many of the 300 companies exhibiting at the event have chosen to use the show as a platform to launch their very latest product collections, and the aisles are awash with innovation.

Abode has introduced several new tap and sinks designs, all created to serve the entry level price bracket. The Xcite granite sink and the Trydent sink join a range of new taps add to Abode’s collection of accessibly priced products, which started with a collection of contemporary-style taps but have now been expanded to offer classic designs.

JJO is presenting a huge range of new products across their Colonial Kitchens, Colonial Bedrooms, Eco Kitchens and Eco Bathrooms collections. One stand out addition is a gloss white kitchen launched as part of the Colonial Kitchens range, a British kitchen designed with a Germanic look, serving the middle market price bracket. The range boasts of wall hung base units and curved cupboards in a classic gloss white finish, and other additions include the Haddington and Integra kitchen collections. Richard Proctor, Managing Director of JJO, said:

“kbb is a great vehicle to bring products to the retailer. Our audience have responded exceedingly well to the new ranges, and we’re on target to meet 1000 people in 4 days. We’re a huge supporter of the retailer, and they deserve a show like this.”

Returning to the show for the first time in ten years is bathroom giant Ideal Standard. Launching on its impressive double-storey stand is the Dea collection, which is aimed exclusively at retailer showrooms. Masterminded by award winning designer Dick Powell, the objective was to create an ‘emotionally satisfying’ environment in terms of both materials and technology. The collection combines soft, rounded designs with durable surfaces – a stand out piece is the tall totem basin sink, which would provide a striking focal point in any bathroom.

Rangemaster has brought its impressive collection of high quality sinks and taps to kbb Birmingham 2014, and has launched a multitude of brand new designs at the show. Highlights include several twists on the popular Aquatrend tap, including matte black, pull out single lever and spring adaptations. Also new is the Kube sink, a sleek undermount sink available as both left and right handed designs which will fit perfectly into a contemporary, streamlined kitchen.

German kitchen specialist Bauformat is debuting its new satin matte glass furniture at the show. Named ‘Murano’, units are available in cream, black, white and grey, and now in the unique brand new silk matte finish. Also launching is the ‘Shnell’ range of rigid kitchens, which come in a wide range of colours and finishes and are available within 10-15 working days.

Famed for its shower trays and bathroom radiators, Fiora has launched its Privilege collection of shower trays at kbb Birmingham, expanding the ever popular Silex range. Two options are available – an extraflat, flush to floor version as well as a framed shower tray, and the products come in two tone finishes that will compliment any interior style. The Privilege collection is available in sizes up to 2000x1100mm, and are now 5mm thinner than ever before, making for a lightweight, low impact product.

British shower designer and manufacturer Roman has launched a brand new range of 8mm thick glass shower enclosures and bath screens at kbb Birmingham. The range, named Lumin8, is made up of sliding and both outwardly and inwardly opening doors, as well as a series of bath screens designed to be used with power showers. The enclosures feature individual, wrap around chromed top caps, discreet seals and silver profiles, designed to create a chic and modern look. The Lumin8 range is manufactured in the UK, and all products coming with a lifetime guarantee.

Appliance specialist Caple has had a very busy stand at kbb Birmingham, in part due to live cooking demonstrations by Michelin-starred chef Josh Eggleton, but mostly due to the wide range of new products on offer. One such product is the newly launched CE1120 ceiling extractor hood, which features an integrated motor, neon strip lights and white stainless steel trim, and is controlled by remote control. The hood can be inset or surface mounted, and has proved very popular with visitors to kbb.

kbb Birmingham opened on Sunday 2nd March and runs through until Wednesday 5th March, from 9.30am to 5pm each day. To avoid the £30 on-site entry fee, you can still register for a complimentary pass at www.kbb.co.uk. 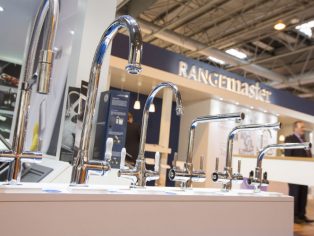