Construction companies across the UK can now benefit from a new online system – called edoc (or electronic duty of care) – to record the transfer of non-hazardous waste between organisations, saving them both time and money.

The construction industry handles more than 12 million tonnes* of excavation waste each year, most of which ends up in landfill. The introduction of edoc earlier this year has provided the industry with a modern, quick and easy alternative to the exchange of paper waste transfer notes (WTNs), something which is still widespread and common place among construction businesses and waste contractors across the UK.

Free to use but not mandatory, edoc allows construction companies to make quantitative reductions in their outgoing costs when it comes to managing the huge volumes of excavation waste produced on a daily basis.

Time is saved on administration such as filing, as well as searching and retrieving records manually. Edoc also offers construction companies a more sustainable alternative to paper WTNs, helping them to reduce paper-wastage and cut down on storage.

Following a change in regulation the construction industry is taking significant steps to reduce the volume of excavation waste and build on their eco-credentials.

In order to reduce the volume of excavation waste produced on a daily basis, a large number of construction companies are now reusing and recycling soils and stones on their construction sites. But monitoring the volume of waste produced can be difficult. Edoc offers the perfect solution to this problem by providing construction companies with the tools to easily monitor and interrogate the waste they produce. This will help them to identify opportunities to improve efficiency, reduce and even prevent waste and so further cut disposal costs.

“We started using edoc a few months ago and confirm the benefits that it has brought to the business.”

“In particular it has the potential to reduce our overall day-to-day administration. However, a key function of edoc is the tool that helps you to track and monitor your overall waste production. With the reduction of excavation waste at the forefront of our business objectives for 2014/15, this is an extremely valuable and useful tool for the business.”

Edoc has been developed under a four year project co-financed by the European Commission (LIFE+). The UK-wide project is led by the Environment Agency in partnership with the Chartered Institution of Wastes Management (CIWM), Northern Ireland Environment Agency (NIEA), Reconomy (UK) Ltd, Welsh Government and WRAP (Waste & Resources Action Programme). The project also has the full support of the Department for Environment, Food and Rural Affairs (Defra) and the Scottish Environment Protection Agency (SEPA).

Use of edoc will not be mandatory, but the project partners hope that the benefits it offers will encourage businesses to make the move online.

“More than 1000 businesses across the UK have already recognised the benefits of using edoc and registered to start using it.”

“edoc provides a modern means of recording waste transfers that reduces the administrative burden on businesses. It’s a simple system to use, with so many benefits, that we want to help every business who takes its environmental responsibilities seriously have an easy option to comply with their legal duty of care.”

In addition to reducing administrative burdens, edoc should also improve the quality of business waste data. Paper records are sometimes incomplete or difficult to read. With edoc, pick-lists, drop-down menus, prompts and templates will make it easy for users to complete fuller records. This will in turn contribute to a more complete and accurate picture of waste produced across the UK than ever before – invaluable for understanding and planning for waste at local and national levels in the future. It is thought that edoc could replace the need for costly business waste surveys, saving governments around £1 million per annum.

Businesses interested in edoc can register or find out more at www.edoconline.co.uk. 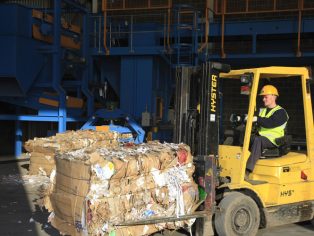