New Kingston homes get their heating direct from the Thames

A new eco-friendly housing development in London is getting the energy for its heating and hot water directly from the Thames in a pioneering community heating scheme that could be replicated in many of our major towns and cities.

Edward Davey, the Secretary of State for Energy and Climate Change, today paid a special visit to the site to switch on the heat pump-based heating system in an official launch of the innovative, renewable system.

The £70 million mixed-use development has been created by NHP Leisure Developments on the site of a former power station right in the heart of Kingston upon Thames, and 200 metres from the banks of the river.

The community heating scheme takes renewable heat from the sun, stored in the river water and boosts it to the temperature required for the underfloor heating and hot water needed by residents:

“At two metres below the surface the water never falls below 7°C, even in winter, so we can be certain that it can provide enough energy to heat the apartments,” explains Mike Spenser-Morris, managing director of NHP Leisure Developments and the visionary behind the scheme.

“If we had fitted gas boilers, then the site would be dumping around 500 additional tonnes of carbon into the atmosphere each year. In addition, because of this system’s exceptional energy efficiency, the equivalent heating cost for a couple living in a one bedroom apartment would be 18% more. For an average home, this would mean hundreds of pounds extra.”

The system can draw up to 13 million litres of water each day – the equivalent of five Olympic-sized swimming pools. The river water passes through a state-of-the-art, two-stage filtration process that ensures no marine life can enter the system.

Inside a specially-built plant room adjacent to the river, the water passes through high-efficiency heat exchangers and, once the low grade heat has been harvested, the water is immediately fed back into the river, untreated in any way.

The heat exchangers transfer this low grade heat from the river water to an internal ‘closed’ loop water system and this is then carried 200 metres to a plant room in the apartment building, where Mitsubishi Electric’s advanced heat pump technology boosts the low grade heat to the temperature required for the apartments’ heating and hot water.

Towards the end of 2014, the construction of a new 142-bedroom hotel, with meeting, banqueting and conference facilities, will also be completed at the site, which will increase the efficiency of the heating scheme further still.

The Doubletree by Hilton hotel will derive all its heating and hot water, as well as its cooling, from the open water heat pump installation. Heat recovered from cooling the individual hotel rooms will be reclaimed and returned to the community system to support the heating and hot water demand for the whole site.

Mike Spenser-Morris believes the scheme paves the way for other developments taking place near an open body of water, to benefit from this highly energy efficient system, doing away with the need for traditional combustion boilers, with their attendant carbon emissions.

“This open water heat pump system will be capable of producing over two megawatts of thermal energy for this development and will provide it 24/7, 365 days a year regardless of the weather or air temperature, even in the depths of winter,” he explains. “Almost every major city in this country is close to a river, lake, reservoir, canal or the sea.

“Every litre of water naturally stores, with the greatest efficiency, the valuable energy the sun delivers to earth each day,” adds Spenser-Morris. “There will be thousands of homes and businesses that can benefit from this most energy-efficient technology and in the process prevent thousands, even millions of tons of harmful carbon being released into the atmosphere from now on”.

Edward Davey, Secretary of State for Energy and Climate Change and MP for Kingston and Surbiton, will be switching on the development’s innovative heating system, harnessing the power of the Thames. He said:

“Kingston Heights is a great example of how sustainable solutions can help power entire communities. I want to see a community energy revolution where projects like this are the norm, not the exception.

“This project will not only transform the waterfront area in Kingston, but also means residents’ bills will be lower than if they used gas.

“The Thames is a great natural asset to Kingston and London as a whole. By capturing the heat permanently stored in the river to provide heat and hot water to the whole development the project shows the enormous potential of renewable energy.” 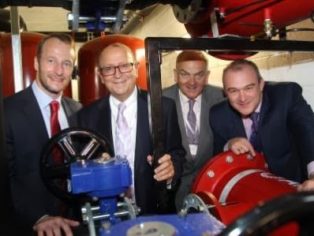 Left to right: Donald Daw, Commercial Director, Mitsubishi Electric; Mike Spenser-Morris, NHP Leisure Developments – the visionary behind the scheme; Jeffrey Adams, CEO of United House; Edward Davey, MP, Secretary of State for the Department of Energy and Climate Change. Inside the development where heat from the river is upgraded and sent to the apartments.