New family homes for Currie win the go-ahead from planners

CALA Homes is to deliver urgently needed new houses in Currie – after its site became the first green belt development to be approved by the Council under Edinburgh’s new Local Development Plan.

The Edinburgh-headquartered housebuilder welcomed the decision by planners to approve proposals for 17 terraced and detached family homes at Riccarton Mains Road.

It means the 1.15 hectare site – close to Curriehill Railway Station and many other amenities in the area – could be under construction by August and completed as early as the end of 2016.

“We welcome this positive statement of intent from the city council. It has a clear strategy for delivering family homes where they are most needed and most in demand.”

“Several years of preparation work and public consultation has been involved in getting to this point. We are very pleased that effort is now coming to fruition and that we were able to demonstrate that our designs would be both suitable and sustainable for this location.”

“Currie is a hugely popular area and we expect high demand from families who want to live there. The mix of properties we’ll be offering will be ideal for those moving into Currie, as well as allowing families already there the chance to trade up without moving away.”

The development will include two-storey detached, semi-detached and terraced properties. The largest will be a five-bedroom home, while a further six will have four bedrooms. Ten of the homes will offer three bedroom accommodation.

While addressing a shortage of family homes in the area, the development will also contribute financially to vital improvements at Currie Primary School, enhancements to the Hermiston Gait Park and Ride and to Gillespie Crossroads, while also helping fund affordable housing schemes.

CALA Homes is headquartered in Edinburgh and employs 600 people and earned its reputation on the high quality of the homes it builds, which are sensitively designed to augment the areas in which they are located.

The result is homes that are highly sought after and which retain their value over decades, earning loyalty from owners, who often live in a series of CALA properties. 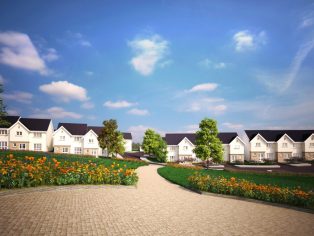