The new community of Grandhome, which will see almost £1 billion invested in up to 7,000 homes, a new town centre, a business district and amenities, was formally launched in Aberdeen today (Thursday 5 March 2015).

During the event on the Grandhome site on the north-west edge of Aberdeen, The Grandhome Trust unveiled the design for a new community building which it will build at the heart of the first neighbourhood, to be known as Laverock Braes. Multi-award-winning Edinburgh-based practice Reiach and Hall Architects has won the brief to design Davidston Hall following an architectural competition held by the Trust. The contemporary building will include a multi-use hall, external public space, a café and small retail unit and is designed to host a wide range of events and functions.

The Grandhome Trust also announced the three housebuilders – Bancon Homes, Cala Homes and Dandara – that have been selected to deliver Laverock Braes, which will comprise around 600 homes and be built over the next four to five years.

A historic mill stone from the old Grandhome flour mill was unveiled at the launch ceremony by the Lord Provost of Aberdeen, Councillor George Adam, and Bruce Smith, a trustee of The Grandhome Trust. The stone will be incorporated into the first public space, Davidston Square, which will form part of the Laverock Braes neighbourhood.

Grandhome occupies a 320 hectare site located six kilometres north-west of Aberdeen city centre. With long-term potential for 7,000 homes, the community is being planned and developed by The Grandhome Trust, a family-led entity which has held the land for more than 300 years. The Trust has a vision to create a community of exemplary quality in terms of its built environment, sense of place, civic amenities and quality of life.

Detailed planning applications for the first phase of infrastructure and Laverock Braes will be submitted in the spring and work on site is expected to begin later this year.

Speaking at the launch, Bruce Smith, a trustee of The Grandhome Trust, said:

“Bringing the vision of creating an exemplary new community in this location to fruition has taken almost 20 years and we are enormously proud to be at the point where work on the first homes and neighbourhood will begin later this year.

“Grandhome combines the best in modern planning and place-making while drawing upon the unique qualities of the site and the architectural heritage of Aberdeen and North-east Scotland. Its homes, neighbourhoods and public spaces have been designed with people and quality of life in mind to promote a sense of wellbeing and community.

“Grandhome will be an exemplary place in which to live, work and invest while also contributing to the wider economic and social life of our vibrant city and region by accommodating future population growth. The fact that one of our first investments will be the new community building, Davidston Hall, reflects our commitment to the long-term vision for Grandhome and its master plan, which has been designed to promote walkable neighbourhoods, a range of home types, community facilities, shops and employment opportunities.

“On behalf of the Trust, I wish to thank all those people and organisations that have helped bring Grandhome to this point and we now look forward to the enormously exciting first phase of development with the creation of the neighbourhood of Laverock Braes.”

Grandhome has been granted planning permission in principle by Aberdeen City Council for 4,700 homes, a new town centre, business district and community facilities including extensive public spaces. The new community will provide an environment of unique type and quality as well as helping to provide jobs, services and homes that will benefit the wider community and economy in Aberdeen and the surrounding region.

The creation of Grandhome will bring significant economic activity to the city with an investment of almost £1 billion in homes and infrastructure over the next 40 years. It is forecast to support almost 600 construction jobs annually and the first five phases of development, equivalent to 4,700 homes of which 1,175 will be affordable homes, will accommodate around 11,500 residents with annual household expenditure totalling £110 million.

“We are encouraged by The Grandhome Trust’s involvement as a forward thinking client and we appreciate their support and aspirations for the building. We look forward to seeing the design develop in the coming months.”

“Bancon Homes is delighted to have been selected as a development partner by The Grandhome Trust for Laverock Braes and we look forward to working closely with them to help achieve their long term vision for Grandhome.”

“Our plans for the Grandhome development have been very carefully crafted to ensure that we enrich the new, emerging community proposed by The Grandhome Trust. Fitting in seamlessly with the Trust’s vision for Laverock Braes, while adding CALA’s signature luxury design and style, has been paramount in our plans, which we feel will breathe new life into the area over the next five years.

“We are delighted to be forming part of the Grandhome vision in creating a vibrant new community for the north-west edge of Aberdeen and look forward to working with the Trust to bring the plans to fruition.”

“We look forward to working with The Grandhome Trust, creating a superb new community offering the benefits of rural living within Aberdeen city, and utilising our own experience of creating successful new communities such as at the nearby Stoneywood Estate.” 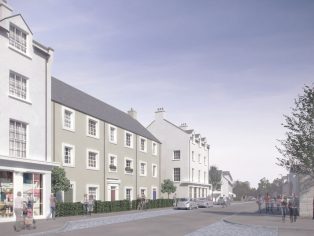