Each year, more than 1 million Brits struggle whether to buy a brand-new home or an existing property. Both options have their advantages and disadvantages; but which prevails in the end?

To answer this question, Fasthomes.org decided to look at the Land Registry’s data of new builds sold in England and Wales. The researchers at Fast Homes analysed a total 262,981 properties that were sold in 25 major cities in England and Wales in 2016. Fasthomes.org found that new-builds accounted for 36,179 of all properties sold, which means that only 13.7% of homebuyers decided to buy a brand-new home rather than “a home with character”.

Unsurprisingly, the largest number of both new and older homes were sold in London. Of a total 73,066 properties sold in the UK capital in 2016, new-builds accounted for 14,591 or 20% of all properties sold. The situation wasn’t much better in other analysed cities in England and Wales.

“Buying an existing property offers several advantages over a brand-new home. Firstly, there is the price factor as new-builds are on average more expensive. Secondly, old homes – especially those built before 1980 tend to be bigger than new-builds. And finally, there are simply not enough new homes for everyone to buy. 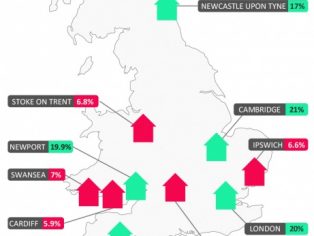