A remarkable new 360 degree interactive photograph – which shows in detail the ongoing transformation of the former Olympic Park – is released today to coincide with the first anniversary of the London 2012 Opening Ceremony.

The photograph was created using wide shot images taken from a helicopter to create a 360 degree panoramic view of the area. Noticeable changes over the last 12 months include additional green park spaces at The Queen Elizabeth Olympic Park, the removal of all temporary venues such as the basketball stadium, the development of the plaza in front of the stadium and the conversion of the Athletes’ Village into the East Village, which is now in the final stages of becoming residential housing. The International Quarter development site has also been prepped for construction and an area of landscaping has been added that creates a pathway from Westfield Avenue to the Olympic Bridge.

“This image captures the ongoing transformation of the former Olympic Park in the last 12 months as it transitions from a series of sporting venues to a cornerstone of the economic and business legacy of the Games.

“The International Quarter is envisioned to become the commercial heart of the Olympic regeneration legacy and will be vital in making full use of the £12.5billion of infrastructure put in place for London 2012. The innovative office space, which will be specifically designed to enhance the performance and productivity of those that work there, will attract big businesses to the area and create significant numbers of new jobs whilst delivering a much-needed economic boost for two boroughs which have previously been amongst the most deprived areas of London.”

Lend Lease and LCR announced last week the first commercial deal at The International Quarter, which will become the largest new commercial district built in London since Canary Wharf in the 1990s. Contracts were exchanged with Starboard Atlantic Hotels LLP for the construction of an 18-storey hotel complex overlooking East Village.

Lend Lease and LCR plan to build on this momentum by submitting a planning application later this year for the first 320 new homes at The International Quarter. If the application is successful, the homes will go on sale in early 2014.

This builds on Lend Lease’s strong progress this year at its other regeneration site in Central London, Elephant & Castle. The company announced this month that it had started on site at the long-awaited £1.5bn regeneration, which will deliver 3,000 news homes and 50,000 sq ft of offices over the next 10 years. 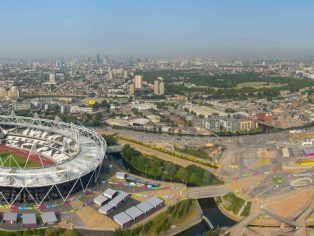