Experts at Focus Consultants have been appointed to project manage the redevelopment of Gilbert White & The Oates Collections after supporting a successful Heritage Lottery Fund (HLF) bid to help fund the work.

The company project managed the development of the Round 2 HLF application for the scheme which is planned for the home of the Rev. Gilbert White, the eighteenth century naturalist and ornithologist who is widely regarded as being the first ecologist. The museum also plays host to the collections of two other explorers, Frank Oates and Lawrence Oates.

Hidden treasures, held for years in the archives of Gilbert White & The Oates Collections in Selborne, Hampshire, will become accessible to the public for the first time following the £1.687m grant from the HLF for the redevelopment of the museum. The award will be matched by almost £1m raised by the museum from other sources.

Now, Nottingham based Focus Consultants has also been retained as project manager for the ongoing delivery of the scheme, which will restore Gilbert White’s stable yard and brew-house, providing a new entrance for visitors. Major improvements will be made to the museum increasing the display space to show more artefacts than ever before.

“This is a great moment for us – the culmination of years of planning and hard work,” said Dr Rosemary Irwin, chairman of trustees at the museum. “At long last visitors will be able to see some of the wonderful treasures we hold.”

Among the treasures to be made available to the public for the first time is one of the few surviving original copies of “Aurora Australis”, the first book to be written, printed, illustrated and bound in Antarctica. It was produced by a team working under Ernest Shackleton, leader of the 1907-09 Nimrod Expedition. Worried that his team might be ‘bored’ during the long Antarctic winter, Shackleton took with him a printing press and encouraged his colleagues to write articles for the book which was then printed and bound in boards made from used packing cases. Only around 70 copies of this extraordinary book were produced – the Queen and the British Library are among the others to have copies.

The Gilbert White’s House is the latest in a long line of heritage sites that funding and development experts at Focus Consultants have successfully supported in their bid applications to the HLF.

“It is great news that the Heritage Lottery Fund is to support the development at the museum which will enable it to work towards achieving long-term financial sustainability, whilst preserving the estate. The Rev. Gilbert White is world renowned for his contributions to the literature of natural history, and Focus Consultants is delighted to be playing a part in helping to preserve this site and his legacy for generations to come. We are looking forward to project managing the scheme, as it moves forward.”

Focus, which is based at Phoenix Business Park, Nottingham, with offices in London, Leicester and Boston and Aubourn in Lincolnshire, specialises in creative approaches to securing funding packages and delivering high quality projects across the UK. Since its creation in 1994, Focus has helped to secure more than £953 million of grant assistance for a range of projects and businesses across the UK and delivered more than £1.3 billion of projects and programmes – making it one of the most successful companies of its kind.

The museum project, which is currently seeking planning consent and will be completed in the Spring of 2018, has also received substantial support, in the form of finance and architectural services, from Hampshire County Council, with donations also coming from numerous major trusts and foundations. Support has also been received from long-term supporters of the museum, such as the UK Antarctic Heritage Trust. 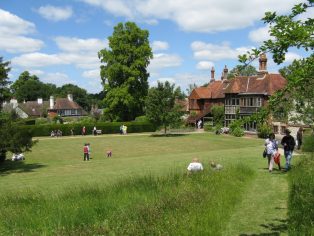