Four Site Managers from CALA Homes (East) have each scooped a prestigious award in recognition of their commitment to the highest standards in housebuilding.

The Edinburgh headquartered developer performed particularly well, with a total of nine winners across its regions landing the “Pride in the Job” awards, which received over 16,000 applicants and were awarded to the top 450 Site Managers across the entire UK.

Winners for CALA Homes (East) were Neal Toland for his work at Brunswick Road and Kenny Reid, of Liberton Grange, two of its Edinburgh sites. Also recognised were Ian Welsh who manages Straiton’s Mayburn Park and Mark Foley, for work at Dalmeny Park, South Queensferry.

For Mark Foley, who is now working as Project Manager at The Crescent, on the grounds of Edinburgh’s Donaldson’s College, this marked his 12th “Pride in the Job” award- an outstanding achievement demonstrating his consistent standard of excellent work.

“We are very proud of Mark, Neal, Kenny and Iain for obtaining the “Pride in the Job” awards. Our Site Managers set the standard when it comes to excellence on site – which is why we see such fantastic results across our developments.

“To have four of them recognised with the highest industry accolade a site manager can receive is just brilliant.

“We would also like to congratulate Mark Foley for his spectacular third consecutive win at Dalmeny Park that takes his tally to 12 – this really demonstrates an outstanding level of consistency and we are so proud of him for the constant support he provides to his team.”

Organised by NHBC, the UK’s leading new home warranty insurance provider, “Pride in the Job” is the most highly regarded competition in the house building industry dedicated to recognising site managers and their construction teams who achieve the highest standards in house building. It has been instrumental in driving up the quality of new homes for 37 years.

Mark Foley, went on to say:

“It is a great feeling to be recognised with the highest industry prize, however this simply wouldn’t have been possible without the support of a quality team, in Lewis Millar, Roy Ness, John Watson and Francis Cassidy.

“There is an expectation of high quality as standard at every CALA development, something that really helps maintain focus on delivering the best we can for our customers.” 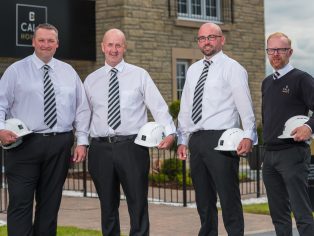