A new £3.7 million expansion of a dockside warehouse facility created for the Port of Southampton looks set to achieve the highest environmentally-friendly rating thanks to its green credentials – which include more than 3,000 solar panels installed on the roof.

Officials from Associated British Ports (ABP), which funded the project, and the tenant Import Services joined Midas Construction Southern, a division of the Midas Group – one of the UK’s largest independent construction companies – today (May 30) to celebrate the work on the warehouse at dock gate 20 reaching the highest point of construction by holding a topping out ceremony.

The 6,000 square metre extension to the existing 14,000 square metre warehouse is due to complete in July, and is on target to achieve the coveted BREEAM ‘excellent’ environmentally-friendly building rating. Once completed the warehouse will be leased by port-centric retail logistics company Import Services.

The BREEAM ‘excellent’ rating is in recognition of both the method of construction and a building’s design. The new warehouse includes more than 3,000 solar panels installed onto the roof of both the new and existing structures. These are forecast to produce around 760,000 units of sustainable electricity (KWh) per year.

With the aim of meeting a number of other strict BREEAM criteria, Midas Construction also avoiding dumping any waste off site, significantly reducing landfill rates.

“Minimising the impact of any new construction on the environment and incorporating energy-efficient measures into the design of a new building continue to be integral factors to our work at Midas, and we were delighted that this substantial warehouse extension has gone so well.

“Midas Construction has worked hard to reduce any negative impact on the environment, such as by ensuring there was no waste dumped off site, and by ABP’s forward-thinking decision to have solar panels placed on the roof of both the original warehouse and the new extension, which will have highly sustainable benefits for many years to come by helping to generate electricity, and reduce energy usage as a result.”

“We are proud of this project because it’s a fantastic example of what we are doing in the Port of Southampton; investing in a sustainable future for the port.

“This is part of £150 million planned investment by ABP in Southampton and its impressive green credentials are exactly in line with a long running programme to minimise our impact on the environment. That’s why we have already invested over £6m in upgrading the rail links to Southampton and why, today, we are proud to say the container terminal that serves this warehouse has the highest percentage of containers handled by rail of any terminal in the UK.”

The new warehouse follows a number of successful projects completed by Midas Construction Southern for ABP in Southampton, including an electrical substation built within the port last year, and a number of retail and office refurbishments created at Town Quay and in the Port of Southampton.

Midas Construction Southern, based in Romsey, worked with design team Godsell Arnold & Partners and Stride Treglown on the warehouse extension.

Midas also achieved its best ever Considerate Contractor scores for the project – an industry leading 44/50 – shortly after the company was invited to join a select number of high performing contractors and become an Associate Member of the Considerate Constructors Scheme (CCS).

The scheme aims to improve standards in the construction industry, and Midas is required to meet strict regulations on all its building sites which go beyond statutory standards, demonstrating that the company works hard to support the surrounding community and minimise the impact of construction work on the environment. 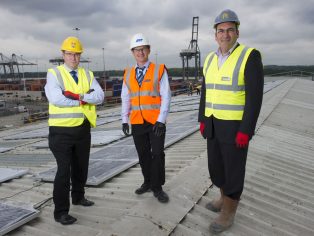 L-R. Roger Loveless, director at Import Services, Gideon Aymes, project manager with Associated British Ports and Paul Strachan, divisional director with Midas on the roof of the Dock Gate 20 Warehouse in Southampton after its £3.7million expansion.