The successful event attracted a packed audience of more than 130 high level delegates from over 60 MPA producer and associate member companies.

“Our General Assembly addressed some of the big issues of the moment and provided a valuable insight into our relationship with Europe, our Union, our Economy and our Infrastructure.”

“The situation has improved significantly for our industry: demand and pent up demand is good for housing, infrastructure and, in particular, energy and transport.”

“The new Government must continue to play its part in continuing to help deliver on all these forms of development.”

“Devolution is here to stay, however, we will encourage awareness to understand cross border issues and the need to see the bigger picture and have a strategic view.”

“We must also consider our future relationship with Europe.”

“As recovery has given way to growth, supply strains are now the new issue, including skills, drivers, technical expertise and of course materials. A resilient, steady and adequate of supply is essential and we are seeing this return to the planning agenda after years of under-replenishment of reserves.”

“So, looking to the future, the MPA 2025 process has begun. There is much to think about in era where access to and use of resources will only increase. I believe availability and use of natural resources will be the defining feature of the next 25 years and the next 10 will be critical in determining the way ahead.”

“We need to understand clearly where we are in terms of both performance and perception. We need to have a shared idea of where we want to be and how we want to be perceived in 10 years’ time and agree how we are to get there. We don’t want Government to think it can drive our strategy, we do need Government to accept and recognise we can.”

Professor Vernon Bogdanor, Kings College London, kicked off the main proceedings with a presentation which examined ‘England, Scotland and the European Union’. He looked at the devolution of legislative powers and services in the UK and in England including such politically sensitive areas such as the NHS. He highlighted that often people aren’t always eager to engage with local government and asked if devolution in England could really succeed without significant devolution of tax raising powers and the creation of a written constitution?

Andy Bagnall, Director of Campaigns, CBI, followed with an exploration of the ‘UK Relationship with the EU’, with a particular emphasis on the importance of the EU to UK businesses. He explained that:

“The CBI’s position is that they want to stay in, but with a reformed EU relationship. Some of the benefits he identified which outweigh the negatives are: access to a single market, common rules e.g. on product compliance, skills to grow, free movement of goods for business and the opportunity for trade deals which have EU backing. The changes which the CBI wants to see introduced include: a more open single market, more chances to capitalise on digital developments e.g. e-commerce, a more outward looking, competitive EU and a better balance between Member States and the EU institutions. Many of these benefits are taken for granted.”

The panel session focussed on the ‘Economic & Fiscal Outlook’, with speakers Paul Johnson, Director, Institute of Fiscal Studies, and Graham Hacche, Editor, World Economy, NIESR Economic Review. Paul Johnson highlighted the issues Government would have to address to achieve a balanced budget, notably the very sharp cuts which will be required in non-protected departmental Budgets. Graham Hacche presented on key global economic trends and challenges which would inevitably impact on the UK, highlighting the need for policies to stimulate global economic growth, notably to improve recent poor performance on productivity.

Sir John Armitt CBE, Senior Vice President, Institution of Civil Engineers and Board Member on Transport for London, provided an insight into ‘Effective Infrastructure Delivery’ in the final presentation of the Assembly. Sir John has proposed the establishment of a National Infrastructure Commission to ensure better management and delivery of infrastructure programmes and highlighted the need for more consistent government policy in sectors such as energy to attract long term private funding in infrastructure.

The General Assembly also launched the 3rd edition of MPA’s ‘Facts at a Glance’ publication, its latest Mineral Products Today magazine highlighting all the latest news and issues affecting the industry, as well as a new MPA Restoration Guarantee Fund leaflet.

The MPA Members’ General Assembly 2015 is a major annual event which attracts a broad spectrum of senior member company representatives with the opportunity to discuss crucial issues of the moment affecting the industry. 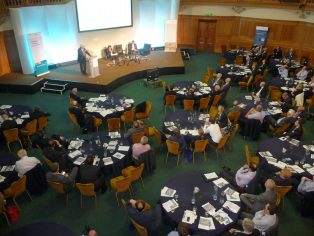