Edinburgh’s city centre has received a major boost with news of a multi-million-pound investment that will deliver 525 new homes for rent in the Fountainbridge area, as well as the purchase of 46 existing private rented homes.

Moda Living (‘Moda’), with joint venture (‘JV’) partner Apache Capital, bought the site ‘off-market’ from Grosvenor Britain &Ireland (‘Grosvenor’).  The JV will design, build, and manage the new Build-to-Rent homes for the long term alongside the existing homes under the Moda brand.

Grosvenor identified Moda for its expertise in Build-to-Rent and their ability to guarantee delivery through their backing from Apache Capital. The deal secures the main residential component in the Fountainbridge regeneration, which is helping revitalise central Edinburgh.

Designed by CDA architects, the new housing will sit alongside 25,000 sq. ft. of new build commercial space consisting of shops, bars and restaurants. All residents will have access to 15,000 sq. ft. of on-site amenity space, including a gym, communal lounges, BBQ area and roof terraces with unique views of Edinburgh Castle, as well as fully managed communal gardens including a new public square. Moda aims to be on-site by end of year, with first phase completed by end of 2019 and all phases complete by end of 2022.

The scheme will be Moda & Apache’s second in Scotland, having purchased the former Strathclyde Police headquarters in Glasgow in October last year, with a view to deliver the city’s first homes purpose-built for rent. The £115m redevelopment will see the complex transformed into c. 400 apartments coupled with on-site amenity areas and new commercial space.

The JV is pushing ahead with delivery of its portfolio across the UK, its flagship £155m scheme Angel Gardens, Manchester started on-site in January this year. They were granted planning for their £85m Liverpool waterfront development, The Lexington, in September last year. Plans for a £172m scheme on Broad Street, Birmingham were announced the month after.

The JV has the largest pipeline of any rental developer, with more than £1.1bn portfolio of sites in city centre locations across the UK.

“To work with Grosvenor, one of the world’s oldest and most prestigious property companies, has been fantastic for us and the work they have done to produce an innovative build to rent scheme set within exemplar public realm matches our own vision of delivering high-quality housing in city centre locations across the United Kingdom. We look forward to continued co-operation as we deliver Edinburgh city centre’s largest scheme of homes for rent.

“Our ambition has always been to build a truly nationwide brand, and with two schemes now underway in Scotland, renters across the length and breadth of the UK will soon be able to benefit from our amenity-rich, service-driven offer.

“As an investor, developer and operator we are here for the long-term and aim to knit ourselves into the city’s fabric taking on the mantle and ethos of Grosvenor. We are looking forward to working with the local authority and community groups to help meet a pressing need for rental accommodation in Scotland’s capital city.”

“Located in the heart of Edinburgh within an established regeneration area, this site matches our previous acquisitions and is perfectly in-line with our strategy of delivering best-in-class PRS developments in prime city centre locations around the UK. We are committing to delivering substantial premium product in Scotland’s domestic markets as the supply/demand fundamentals are still prevalent post-Brexit and further underlines the defensive nature of PRS as an attractive investment in times of economic or political uncertainty, with its ability to generate long term, stable and diversified income streams.

“The acquisition of Springside, is the seventh site that we have secured and under control in our JV with Moda and we have significant capital available to continue expanding our platform and to acquire and fund further sites.”

“We are committed to great placemaking and believe new, high-quality rental homes in Fountainbridge will help unlock the district’s potential. In Moda Living and Apache Capital we have selected an investor and operator with a similar commitment who will deliver much needed new homes ‎in this burgeoning neighbourhood for Edinburgh.”

“I am delighted to see Moda Living and Apache invest significantly in Scotland’s growing Build-to-Rent sector. This Government has made clear its commitment to boosting housing supply across all tenures and we recognise the significant contribution that can be made by a high-quality purpose-built private rented sector. We have taken a range of actions to encourage developments like this to come to fruition and look forward to the benefits of this investment being realised on the ground.”

“The announcement of this major investment in the build-to-rent proposal at Fountainbridge is a substantial vote of confidence in both the Edinburgh property market and the Scottish Government’s plans to create flexibility, choice and affordability in the wider housing sector.

“This kind of purpose-built, high-quality and professionally-managed PRS development can rapidly increase the provision of much-needed new build housing, while at the same time positively transforming the experience of rented accommodation in Scotland for the long-term.”

Burness Paull and KPMG acted on behalf of the vendor, Grosvenor, with Brodies and Rettie & Co acting for the purchasers, Moda Living and Apache Capital. 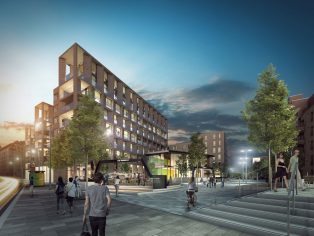