The Midas Group, one of the largest independent construction companies in the UK, has reported a 12% increase in turnover and 73% rise in pre-tax profits for the last financial year.

The business attributed the strong growth to its customer service strategy, now in its second year of operating, which saw 70% of revenues derived from repeat business and industry-leading customer satisfaction scores in excess of 80%.

“Despite continued pressure on margins, our sustained focus on customer service continues to deliver high levels of repeat business and we remain well positioned to maximise opportunities presented by the tentative recovery.

“Since launching our customer service vision and strategy two years ago, results have exceeded expectations and in the last 12 months we have achieved record customer satisfaction scores in excess of 80%.

“It’s no coincidence that in the same period we saw 70% of revenues come from repeat business, contributing to double-digit growth in turnover, while our relentless focus on costs and risk mean we were able to deliver a 73% increase in taxable profits.

“There is no doubt that the customer service culture in our company has led to improved performance, increased levels of satisfaction, more repeat business, and improved financial results.”

The Midas Group, headquartered in Bristol, is the parent company of market-facing businesses including Midas Construction, Midas Retail, Midas Commercial Developments and Mi-space, a specialist business providing property services to the housing sector.

Mi-space made the single largest contribution during the last financial year as a result of the strengthening housing market, with pre-tax profits of £1.5m – a rise of 350 per cent on last year, despite a small drop in turnover for the period.

Mi-space now holds positions on more than 10 frameworks with a pipeline of work guaranteed for up to 10 years. Current projects include the £13.3m rejuvenation of the Mount Wise estate in Plymouth, as well as providing property services to affordable housing providers, such as managing a £5m refurbishment framework for Knightstone Housing Association.

Midas Construction continues to be a major force in the regions, operating through six offices across the South West, South East and South Wales.

The company’s turnover rose by 33 per cent in 2013/2014 compared to the previous year, with tight cost control contributing to profits after tax of £250,000.

Midas anticipates further improved results in the year ahead as it continues to develop major projects across the South, including the £11.6m Filwood Green Business Park in Bristol; a £37m care village in Hampshire; a £13m upgrade of the BBC offices in Plymouth; a £12m luxury Next store in Southampton, and the £7.3m refurbishment of a key Bristol city centre building.

Midas Retail saw a marginal increase in turnover of 1% compared to the previous year, despite a difficult marketplace with restricted capital investment in the supermarket sector, and Midas Property Services UK – which trades as Midas Interiors – increased its specialist fit-out and refurbishment work, with a greater proportion carried out through Midas Construction to provide clients with a bespoke service.

Midas Commercial Developments consolidated its position as a successful property developer, with a number of successful projects ongoing, including the £2.3m expansion of Torbay Business Park.

“We have seen some upturn in the market. Housing construction grew for the fifteenth month in April, and momentum across the rest of the construction sector rose for the twelfth month in a row. But competition is still fierce, and to win work we must look to deliver the same customer experience as other, more consumer-facing industries.

“The flexibility and a willingness to work with clients from the very start has been a key element of our success, and this will become more important for us all as clients want even more involvement in the services they engage with.”

The Midas Group started the new financial year with a strong order book and with positions on more than 20 major frameworks; directors believe 2014/2015 will see the company achieve further “steady, profitable growth”.

The Midas Group was founded in 1976 in Exeter as a building and civil engineering company. The business has grown tenfold in the last 15 years and now employs over 450 people. 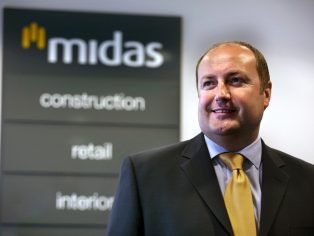