The former RIBA President died after suffering a stroke earlier this week, according to the Architects’ Journal.

Born in 1929, Manser studied architecture at Regent Street Polytechnic (now University of Westminster) before qualifying in 1954 and setting up one of Britain’s most well established practices, Michael Manser Associates in 1961.

He was President of the Royal Institute of British Architects from 1983 to 1985 and was elected a member of the Royal Academy in November 1994.

“I am very sorry to hear about Michael Manser’s sad death. Michael designed some of the most breathtaking and inspiring one-off houses of the late twentieth century, built in his pure, modernist style.

“He championed well-designed housing throughout his career, encouraging the public to demand and mass house builders to supply better designed homes – for many years the RIBA presented an annual housing prize in his name, the Manser Medal.

“Michael’s work is an inspiration to so many and he will be greatly missed. I for one will miss his wonderful anecdotes, his wise counsel and warm smile.”

“The sad death of Michael Manser marks an end point in British modernism as applied to domestic architecture. The best of his houses from the 60s, 70s and 80s with their rational plans and brave use of generous near-frameless glazing showed him to be the English heir to Mies.

“Michael continued to be as excited by new ideas in architecture as he was angered by bad ideas and bad buildings. He took the subject seriously, never more so than when judging houses for the prize on his name.

“He was generous and encouraging to younger architects, particularly those on whom he detected some sign of the same spark that drove his own young projects.

“For all that his modernism was rooted in the past, in the classicism of the eighteenth an early nineteenth centuries. Those of us who spent much time on his company – and what a pleasure that was – heard his views on the primacy of proportion in Regency architecture hundreds of times.

“But equally he admired those who pushed against the rules, particularly when laid down by planners. His other bete noir was the British Housebuilder and he saw at one of the major tasks of his later life to reward examples of the work good architects who set higher benchmarks for all housing.

Michael Manser was the designer of a number of steel-frame houses, some of which are now Grade-II listed. Other key projects include the groundbreaking 400 bedroom Hilton Hotel at Heathrow Terminal 4. The huge atrium, with clear glass views at each end have been cited by travellers such as Michael Palin and JG Ballard as their favourite buildings. It remains one of Hilton’s most profitable and efficient hotels.

Manser famously declined to receive a CBE in 1988 due to the controversy over modern architecture with Prince Charles when the Prince of Wales called the National Gallery scheme a “monstrous carbuncle” during his speech on the 150th anniversary of the RIBA during Manser’s presidency of the institute.

The architect was eventually honoured with a CBE in 1993. 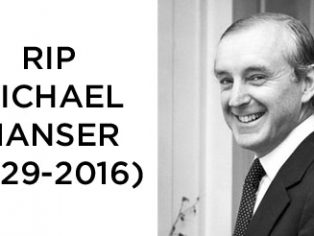 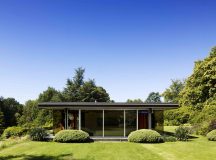