Metal comes to the fore in public-facing projects

Most of the sports fans in the Chris Hoy Velodrome at this year’s Commonwealth Games in Glasgow would have been gripped by events on the track. Had they chosen to glance upwards, they would have seen an intricate roof design that was not only structurally essential but also added to the visual appeal of the building.

Designed by 3D Reid, this sort of steel fabrication is becoming more commonplace in the construction of major public-facing projects as designs move away from the simply structural towards an attempt to blend the utilitarian with the greater aesthetic. Sports stadia in particular has seen an improvement away from the traditionally grungy concrete and steel bowls that, in the UK at least, typified the experience of sports fans prior to the publication of the Taylor Report in 1990.

Two major landmarks in this improvement in design were the redevelopment of Wembley Stadium, with its iconic new metal roof, and the Bird’s Nest Stadium, built for the 2008 Olympics in Beijing, where the envelope and the structure became one. The architect on the Wembley scheme was Populous and the practice has gone on to take a radical new approach to the specification of metal in projects since then from the London 2012 Olympic Stadium to the proposed new GAA Athletic Stadium in Belfast, where a steel-fabricated roof will also be used.

“We normally look at the form and how the different levels fit together and the performance requirements. That leads onto choice of materials. It’s often steel that’s specified due to its strength and weight.

“The roof design is often the defining feature so you are very aware of how it will appear on the skyline. We looked at many different options of how the London Olympic Stadium would look and in particular the lighting. We used a combination of tubular steel and steel cables to great effect that made the lighting towers look very delicate.”

Populous has also used stainless steel to great effect outside of the roof on other areas where the project’s interaction with the public is vital, such as the stainless steel staircases that the practice specified at Ascot Racecourse back in 2006.

Different metals have also been specified to produce an innovative aesthetic at other stadia projects. A good example can be found on the other side of the world to London at the Adelaide Oval in Australia, where bronze cladding and copper mesh were specified. The aim here, according to Mee Kyong Kim of architects Walterbrooke, which worked on the project with Cox Architecture and Hames Sharley, was to add an extra dimension of material quality to the sports stadia typology on the redevelopment of an iconic Australian sports venue.

The palette of facade materials includes sandstone coloured concrete, glass, bronze and copper and was inspired by the local context with the bronze and copper specified to pick up on existing bronze sculptures. The bronze and copper facades from Aurubis will also gradually weather to a dark |reddish brown colour that should sit comfortably within the park landscape.

“The copper mesh wraps and meanders around the external facades and stairs as a gentle, curved veil along the radial grids. A series of solid bronze volumes protrude though the veil and curtain-walled envelope. Each one is oriented to optimise views to St Peter’s Cathedral, the gardens, the riverbank and central area, from the dining rooms and members’ bars. This material language is also applied to the internal atrium space.”

At the Splashpoint Leisure Centre in Worthing, architects Wilkinson Eyre specified the use of copper in the construction to pick up on the proximity to the sea. The practice’s design maximises the potential of the site with ‘ribbons’ of accommodation that flows from north to south with the intention of emphasising the connection between land and sea.

Each pool form has its own terrace and the dynamic, fragmented shape of the centre, including a saw-tooth roof with ranks of sinuous edges, is arranged to respond to the surrounding mix of built forms and landscape and reduce the visual mass.

The structure is clad in copper supplied by Aurubis and red cedar – a palette of self-finished natural materials selected to age gracefully in the maritime conditions. The facade integrates a series of substantial glazed panels, creating the effect of “picture frames” to the windows and roof lights.

A spokesperson for Wilkinson Eyre said:

“Copper and timber are materials that are synonymous with the tradition of English seaside culture. These materials are also robust against the fierce coastal elements, complement each other aesthetically and are sensitive to the history of this beautiful seaside town. Copper is a material that truly ‘roots’ itself to the site; the material metamorphoses from its traditional rich, reflective copper red through to the dull dark browns and further to a vibrant green patinated finish.”

The specification of a metal cannot always be seen and often with that aim as demonstrated by the design at another award-winning leisure centre in Bristol. LA Architects specified aluminium curtain walling with the intention of the metal being ‘invisible’ at Hengrove Leisure Centre in Bristol.

Built by Kier and operated by Parkwood Leisure on behalf of the city council, the project is one of the first centres in the UK with a 50m swimming pool to achieve a BREEAM Excellent rating. LA Architects’ design specified large sections of Technal curtain walling, which included a 50mm aluminium profile that was sufficiently robust to hold glass units, some of which spanned 2.75m by 2.2m.

The architects’ aim was to create an ‘invisible wall’ allowing unobstructed views onto a landscaped central plaza inside. This created greater visibility from outside the pool and inside the centre and contributed to an award for community benefit from the Royal Institute of Chartered Surveyors.

“We wanted to achieve a crisp, sharp edge to the curtain walling here and to create a building that is filled with light. Our aim was to bring the landscaped plaza inside the centre by having perimeter walls that are almost transparent, giving a greater feeling of space.”

A decision by Arup to opt for aluminium on the Singapore Sports Hub was driven by the aesthetic it created and also the metal’s weight.

“The King’s Hotel Indoor Arena was adjacent and that had a titanium roof and aluminium was important to have a continuous surface of reflective metal,” explains Clive Lewis, an associate director at Arup, the architect and the engineer on the scheme.

The Singapore Sports Hub is the largest free-standing dome in the world and simply relying on steel would have been problematic structurally. Instead, using a unitised system of aluminium cladding that was assembled on the ground then put up in sections of around 45m by 6m using a crane allowed Arup to dramatically cut the amount of steel needed.

“We used about a third of the amount of steel that would have been used. Everything about the structure was about cutting weight. With the cladding, we achieved 30 kg per sq m.”

Singapore gets tropical rain with up to 70mm every three minutes in monsoon season. That means rain noise is also a big issue on roofs. On the hub, the use of aluminium also helped improve the acoustic performance of the roof. Aluminium and steel were used to both create a distinctive impact and also help keep costs down on the London Designer Outlet. Built by John Sisk and designed by architect Leslie Jones, the scheme opened late last year and is located next door to the Wembley Arena in London.

“This wasn’t just a designer outlet but also a leisure scheme with cinema and retail. There was a tight budget as rents are low compared to a retail-only scheme. We had to come up with our own elevation that was exciting and could also sit alongside Wembley Arena.”

After a strategic decision further up the supply chain, power coated stainless steel with aluminium in the centre was specified.

“The metal cladding offered us dynamism and the aluminium in the centre gave us highlights,” adds Mr Cons. “The metal work also offered us a contrast to the brick plinths. We used composite aluminium panels from Kingspan to clad up the back of the parapets, which was a cost effective solution. The car park was also completely clad in aluminium fins of various forms.”

The combination of steel and aluminium may be taken for granted by members of the public visiting the LDO, but not by a construction team working to a tight budget. However, for the public, the use of metal is also becoming more commonplace.

With so many increasingly innovative products being offered, metal has moved a long way from simply being a fundamental – but often unseen – part of the construction process to one that can create both a cost-effective and exciting solution in the design process. 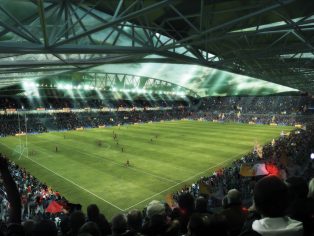 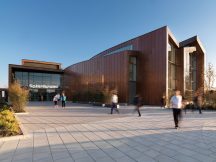