EQUITONE provided the hall with a decorative, tactile, smooth surface that allows the natural variegation of the fibre cement finish to be seen through the semi-translucent coating, providing an aesthetically pleasing and practical finish.

The vision for Sir Robert Woodard Academy was to create six small schools within a school, known as ‘Chapters,’ to accommodate 1,200 pupils. The chapters are housed in six projecting two-storey mono-pitch wings with a central mini-barbican area which uses complex geometrical shaping to create a dramatic entrance to the academy. The wedge shaped atrium was designed to ‘shine out’ to act as a beacon for the Academy’s values.

EQUITONE was specified by Architecture PLB to break up the large mass of the sports hall at the southern end of the building. EQUITONE was used along the two main flank walls of the large 6-court sports hall and covers the majority of the west facing elevation.

A grey shade of EQUITONE was specified to provide a sympathetic contrast with the buff coloured brickwork, without being overbearing given the scale and height of the cladding bays.

Mike Skilton of Architecture PLB said, “Sports halls are notoriously difficult to clad with any high degree of articulation due to their size and lack of external features such as windows and doors. We overcame this issue by breaking up the 33m x 18m flank walls by expressing the position of the six internal badminton courts on the external facade using the EQUITONE panels.

The EQUITONE panels sat above a 2m high brickwork plinth that visually tied the sports hall into the rest of the school building, which was predominantly brickwork throughout. The clean, precision cut edges of the Marley Eternit EQUITONE , along with its tactile, smooth surface provided the aesthetic finish that we required.”

The walls were inner leaf constructed with 140mm paint grade dense concrete blockwork up to 3m high then replaced by 150mm wide Metsec stud with a 10mm thick cement particle board on the outer face. The

The clients on this project were Woodard Schools and West Sussex County Council. Main contractor was Balfour Beatty.

For more information on EQUITONE from Marley Eternit, telephone: 01283 722588, or email: info(Replace this parenthesis with the @ sign)marleyeternit.co.uk. Alternatively, visit the website at www.marleyeternit.co.uk/equitone. 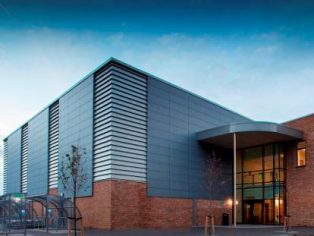