The 13-storey apartment blocks originally built in the 1950s, were renovated based on designs by national architects Pozzoni and were recognised for their sustainable features that aim to minimise the development’s carbon footprint and create energy savings for tenants.

A number of sustainability measures were put in place throughout the refurbishment process meaning that the development will offer a saving of approximately 28,000 tonnes of carbon over its lifetime.

The BREEAM Awards recognise the world’s most sustainable buildings and the 2017 shortlist included projects from France, Belgium, Spain, Netherlands, Sweden, China and the UK.

“We are delighted that the Tribe scheme has been recognised on an international level at the BREEAM Awards. Achieving a sustainable development was always one of our top priorities for this project and a substantial amount of work went in to the refurbishment, so it’s fantastic to receive this prestigious accolade.”

The £17-million scheme, which created 192 new private rented sector homes in the city, was made possible due to the partnership between Manchester City Council, Homes and Communities Agency, Ancoats Residential Holdings and Rowlinson Constructions.

“Before the renovation work, the Tribe tower blocks had been empty since 1994, so extensive work was required to make them more sustainable, suitable for residents and to substantially reduce carbon emissions. We’re incredibly proud to have been involved in a scheme which has been so successful.”

The existing 1950s construction was transformed with a wrap-around thermally efficient facade, triple-glazed windows, LED lighting and centralised heating and hot water via a biomass boiler. These measures reduced internal water consumption by 25 per cent and CO2 emissions by 65 per cent compared to a new build apartment. The BREEAM Awards judges noted the strong commitment to sustainability from the client and project team and how the refurbishment had made the most of the existing materials and structure as well as creating opportunities for enhancement.

Each apartment has a heat meter which is connected to a wet central heating system providing a more efficient heat source than electric panel heaters which are common in many new apartment schemes. Thanks to this system, occupiers at the three tower blocks, collectively known as Tribe apartments, benefit from energy prices that are typically half those of electricity users.

“Securing a BREEAM ‘Outstanding’ rating is a huge achievement for any development but especially with old, redundant buildings which bring additional challenges. The Tribe scheme is testament to what can be achieved with a dedicated team and the use of innovative new technologies.”

As well as this latest award, the domestic refurbishment project also won ‘Sustainable Housing Scheme of the Year’ at the Housing Excellence Awards 2016.

With over thirty years’ experience, Pozzoni has built up an impressive portfolio of public and private sector developments including offices, industrial, education, retail, housing, leisure and care projects from its offices in Manchester and London. 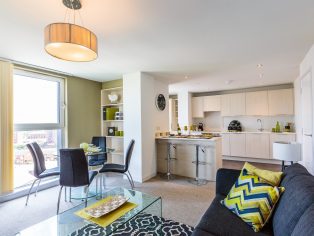