James Parker visited Tate Harmer’s new timber building which enables a Surrey school to connect with the landscape, while opening up circulation and giving it a new ‘heart’

According to Jerry Tate, Partner at Tate Harmer Architects, the key word that most characterises the approach of Cranleigh School in the leafy Surrey Hills is ‘outdoorsy’. The key success of the new building his practice has created at the school is how it engages as much as possible with the natural environment while providing healthy teaching spaces. Cranleigh is divided – by a small road – into a Preparatory school for 5-11 year olds, and a boarding co-ed school for 13-18 year olds, and benefits from a beautiful semi-rural site, surrounded by fields and hills. The school’s ethos is fuelled by its connection with this landscape, including a strong focus on sport. The new arts, science and design & technology (DT) building for the ‘Prep’ school embodies that connection. Although facing onto a raised cricket pitch along its northern flank, the school’s buildings were previously somewhat disconnected. The provision for art and science was not ideal, with the former located in a mediocre 1970s single-storey building, and the latter dispersed across the site. With all this in mind, Tate Harmer, who specialise in sustainable timber buildings for education with a pedigree including the Education Centre at the Eden Project, won the competition in collaboration with Blue Forest, Design & Build contractors, who originally specialised in treehouses. The design aimed to solve several problems as well as uniting art and science in greatly improved accommodation, it would also resolve other issues on the site such as circulation, as part of a wider masterplan.

At the project’s initiation in January 2016, the hope of the school’s then headmaster, Michael Wilson, was to avoid internal circulation as part of his drive to create a building which embraced its surroundings. Jerry Tate tells ADF that having been raised in Africa, the headmaster “couldn’t stand internal corridors.” His upbringing had given him a love of being able to quickly access the outside environment, and his inspiration was African ‘Safari Lodges’ – straightforward timber buildings often with pitched roofs, terraces, and exposed structural elements.

The new arts and science building is located in the middle of the school, forming its new ‘heart’, as the missing link in the plan. Circulation is entirely external – at ground level there is a path to the north, and a new cloister-style colonnade created to the south – at first floor, a deep timber terrace overlooks the cricket pitch. The colonnade connects to existing circulation, enabling pupils to walk to lessons under cover but without disappearing into internal corridors as was the case in the former ‘temporary’ building on the site. The building also has a full height void giving permeability and access through from north to south. The new building’s 20 metre-deep, 30 metre-long form is in some senses a very simple construction, a two storey, glulam-framed and Siberian larch-clad building which greatly improves the school’s built presence in its context. Its volume has been broken down by being folded into five gable ends – seen as more child-friendly by the architects than one monolithic form, as well as being appropriate for the local vernacular. The roof is formed of exposed glulam trusses “leaning into each other,” says project architect Andrew Baker-Falkner – they are diagonally oriented and attached to the beams via grey-coated steel plates, creating large triangles. A sense of lightness is given by the fact that the plates hold the whitewashed trusses a few centimetres clear of the beams. Jerry Tate comments: “We really wanted a simple building which would work hard for the school, doing lots of different jobs.” It’s not a true timber building – the upstairs floor needed to be of concrete due to compliance with BB98 acoustics standards for learning environments. Reverberation times in the capacious 5 metre first floor ceiling have been reduced using acoustic panels around the trusses, and there are suspended baffles downstairs. The building’s key external design statement comes from the way the roof cantilevers over the terrace to provide five triangular overhangs, their trusses pointing outwards towards the cricket pitch. Naturally continuing the rhythm from inside but with soffits of larch, they protect a good part of the terrace – enabling decent numbers to gather for cricket matches and other events. The architects and client hope that thanks to the overhanging roof, future art classes could also potentially take place outside. All classrooms lead out on to either the front terrace or the external ground floor circulation. During the design process, a flight of stairs was added to the terrace leading down to the toilets in the existing building. This was requested by the headmaster, reportedly telling the architects: “When kids need to go, they really need to go.” While the timber frame had to be covered up to a large extent internally due to acoustics and fire issues, externally the building is pretty much exclusively faced in timber. The Siberian larch’s warm orange will silver over time which will help the facades blend harmoniously with the surrounding buildings.

Eight classrooms are provided in total – three science labs and a design and technology (DT) room have been located on the ground floor due to their more highly serviced nature. On the first floor, a looser-fit set of classrooms is provided – three for art and one for home economics – the latter sitting above DT. The art rooms are separated by partitions which can be removed, creating a huge space for events such as art exhibitions and end of term presentations. Leading onto the terrace, home economics has already been used to provide food for gatherings on the terrace. The rooms are exceptionally airy and spacious, with a floor to soffit height of 3.2 metres thanks to all surfaces being exposed. With the absence of a corridor, daylight comes in from large windows on both north and south elevations, also providing natural ventilation and excellent views. Andrew Baker-Falkner comments that in the case of the DT room, the headmaster wanted ample surface space – not only for the various machines used, but also for pupil design work to take place: “the client was as focused on the design as the making.” The benches have been created by pupils themselves, as a demonstration of their skills. The science labs are equally impressive, with reconfigurable desk ‘islands’ for pupils to sit in small groups. Andrew Baker-Falkner comments: “The spaces cater for new ways of teaching – previously shoehorned into old buildings – they never really had a building that was designed from the outset to do what they wanted to do.” He adds: “They wanted to have a very flexible building as they didn’t know how they were going to be teaching science in five or 10 years’ time.” ‘The art rooms upstairs also provide a great amount of flexibility due to the removable partitions, and like the science rooms, also have storage areas along the south elevation – one containing a kiln. However it’s the combination of natural light from dual aspect floor-to-ceiling windows, and the dynamic forms of the roof trusses that makes these rooms great places for pupils to learn, and also be fully aware of how their building is constructed.

The building has been designed with a simple, no-frills approach to sustainability, centred around natural materials, natural ventilation and avoiding a reliance on M&E which can cause maintenance issues down the line for education clients. This was also because mechanical ventilation was simply not needed thanks to the corridor-free design (heating is via standard radiators linked to the school’s system), and was inappropriate here given the likely pattern of use, confirms Jerry Tate. “There’s no point making a super air-tight building with mechanical ventilation, because staff and pupils are going in and out all the time – that’s the point of the institution.” The double aspect enables natural cross-ventilation, but despite the simplicity of the approach, the architects still energy modelled the classrooms to ensure ventilation levels were acceptable. The only space that has any form of M&E cooling is home economics, but this will “only be needed on very hot summer days,” says Andrew. Jerry Tate comments, “The headmaster was clear from the start – questioning why have corridors as kids don’t melt, they are eventually going to have to live in a world with weather.” He adds that the way the building explicitly connects with its environment as far as possible ties into the practice’s ethos of giving users of its buildings easy access their surroundings: “There is an inclusivity issue with a lot of the work we do, which is about access.”

The final piece of the masterplan to date was the decision to turn the former art building, a small 1970s-built single-storey anomaly – previously isolated in the middle of the site, into a real asset. This was completely refurbished and reclad in larch, providing a purpose-designed ‘Parent/Teacher Hub’ which will allow parents to have a far more informal way of meeting teachers. This included generous windows enabling parents to see a large amount of the school itself including the new building. A green roof was the ultimate goal, particularly as the hub’s overlooked by the art rooms, but was not possible due to budget constraints. It will now be the “front door to the school” says Andrew, enhanced by landscaping to come which will provide a much more welcoming approach than the current tarmac. Says Jerry Tate: “The hub idea is currently in vogue among private schools –you can meet the teacher without having to go back into an office, which is very confrontational. It’s a soft ‘interstitial’ space that’s not the school and not outside.” He adds: “It was eked out of nothing in terms of the budget.”

Jerry Tate says that despite this being a prestigious private school, there was a demanding budget to stick to, and some compromises were necessary such as not having a brick base as originally intended. Repeatable elements such as in the roof construction helped keep the costs down, but this does not feel like a ‘value engineered’ project. Tate says that the project being design and build helped the project stick to budget, but didn’t mean compromises – “the advantage of D&B was that what we said we were going to do, we did.” There was a further benefit in that Tate Harmer has often worked with contractor Blue Forest. Says Tate: “They’re quite a sensitive design and build contractor, with a lot of timber-framed sustainable buildings in sensitive landscapes. We have a natural affinity with them”. Tate reports that the school’s bursar “is thrilled because the project stuck to time and cost,” crucially, it needed to finish before the start of the academic year. But moreover, he says, “it represents a sustainable future for them, that’s really important.”

Through thinking around the brief, Tate Harmer has produced a ‘Swiss Army Knife’, solving a range of problems for the client, says Jerry Tate: “We were really keen to show how we could exceed the brief, just through design, not spending more money; the building does all these extra things”. Tate admits it somewhat refutes the idea of “tight, sculptural forms” that architects love, with its set of overhanging gables, although he’s right that these have their own somewhat sculptural presence in the landscape. It will be interesting to see how Allies and Morrison’s new building over the road at the main school compares, once it’s finished. Crucially, as well as providing an outdoor function space alongside fantastic education spaces that will inspire young pupils, this project also managed to unpick this school client’s circulation problems, and create a future entrance sequence. And, as Jerry Tate stresses, it demonstrates how education buildings can be not only practical solutions for the client, but also open up to their surroundings in a brilliantly simple way. 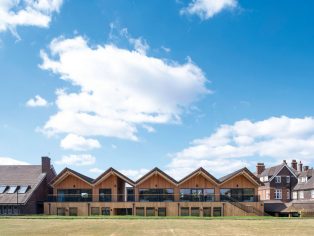 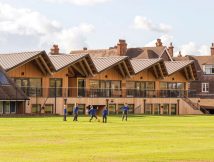 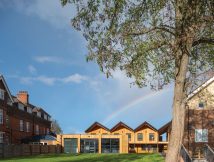 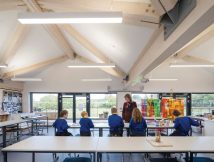 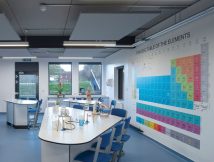 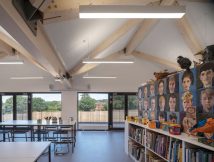 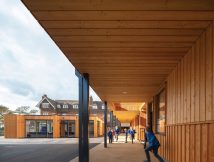