Masterplanned by AJ100 architects Stephen George + Partners, Leicester’s Connecting Spaces regeneration project will see the transformation of Great Central Station and the site of the former Stibbe factory with new hotels, offices and a traffic-free public space, together with a refurbishment of the Great Central Station itself.

Having received planning permission in October 2017, the former Stibbe site will be redeveloped with a new 43,000 sq ft office block and the refurbishment of the station, including its glass canopy and front façade,  to designs by Stephen George + Partners; together with a 152-bed Novotel hotel and 100 bed Adagio “aparthotel”. At the heart of the proposal is a new traffic-free public space, which will include part of Great Central Street so that the refurbished station becomes integral to the development.

The Masterplan also involves creating a new pedestrian “super-crossing” of Vaughan Way, linking the development directly to the city centre.

“Leicester city centre is undergoing widespread transformation, with regeneration projects in the cultural, business and waterside quarters. The station and Stibbe sites represent an important part of the jigsaw: having lain neglected for so long, the Masterplan which we have designed with Charles Street Buildings breathes new life into the area with new buildings and a public space which will add to Leicester’s developing sequence of squares.”

“The development of this site, with the pedestrian ‘super-crossing’ of Vaughan Way and the continuation of this route to the Great Central Station, provides a key link between the city centre and the Waterside Regeneration Area.” 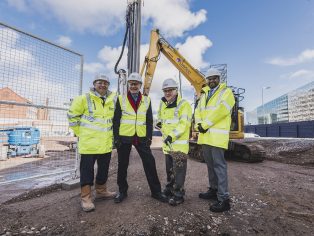