Maccreanor Lavington stole the spotlight at the 2017 Brick Awards, which saw the practice collect a total of five awards and one ‘commended’ prize for their work.

The annual awards from the Brick Development Association now in its 41st year, celebrates exemplary clay brick architecture across the UK.

Garden Halls in Bloomsbury, a student residential scheme for the University of London with TP Bennett which completed earlier this year was commended for its use of intricate facade brickwork.

The South Gardens regeneration scheme in Elephant & Castle won Large Housing Development (over 25 units) and the highest accolade of the evening ‘Supreme Award Winner’, The first phase of the project for Lendlease replaces the former Heygate Estate and it was praised by the judges for the way brick was used to make each block of the development unique. Brick not only allowed the opportunity for creating a wide range of expressive detailing but also reinforced the sense of certainty and comfort synonymous with brick-built homes.

“We used a variation of 9 types of bricks across South Gardens, not just for a decorative element but also for reflecting light and bringing a richness into the elevations of the building that also reflects the traditional architecture of the city. Maccreanor Lavington is a practice already renowned for meticulous work with brick and these awards strengthen this accolade.” 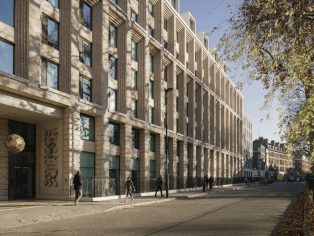