Maccreanor Lavington have designed a striking new elevation for the University of London’s £140m  Garden Halls student campus redevelopment set within Bloomsbury’s Conservation Area in the London Borough of Camden.

Maccreanor Lavington worked alongside Executive Architects, tp bennett, to design the new principal nine storey façade facing Cartwright Gardens and a lower seven-storey building at the corner of the historically sensitive and challenging site. The new student halls for the University of London in partnership with student accommodation provider University Partnership Programme (UPP), replaces the former 1930’s and 1950’s buildings to accommodate 1,200 student rooms, making it one of the largest student halls of residence in London.The partnership, established in 2013, involved UPP designing and financing the scheme, thereafter operating the scheme for 50 years, and will help the University of London to continue its current trajectory; to grow and develop as one of the most significant academic institutions in the Country.

The challenge was to design a contemporary nine storey facade along one side of an historic garden square in Bloomsbury opposite a crescent of listed four storey Georgian townhouses. The design takes its cues from the larger Victorian and Edwardian buildings that have been previously added to the fabric of Bloomsbury.  The design shows a meticulous approach to scale, order and relief.

The main façade facing Cartwright Gardens is a highly articulated and finely crafted brick building, made from high quality materials and simple crisp detailing. A buff water struck Petersen brick is the principal building material chosen for the elevation. This is offset by white reconstituted stone and glazed terracotta cills and two storey mansard. The upper five stories are expressed as a series of stepped brick piers and frames over various window openings that are gathered together to form a vertical order over the façade.

The ground and first floor are grouped to form a single base to the building with brickwork piers being rusticated by recessing every fifth course.

This finely crafted façade sits behind new painted metal railings that match those within the surrounding square. The new double height entrance is lined with panels to the side walls and floor of stone mosaic inlaid with brass letters and lit by large brass coloured pendent fittings designed by Tom Dixon.

The Leigh Street corner building is expressed as a pair of simple punched brick elevations. Darker water struck bricks are used here to match the soot aged brick of the surrounding area. The windows have reconstituted stone surrounds and the brick sits on a single storey stone base evoking the memory of the 1950’s buildings that went before.

The entire (4,500m2) brick façade was manufactured offsite as brick faced precast concrete panels. The prefabrication has cost effectively allowed the design team to develop stepped brick details that make reference to the detailing of traditional load bearing masonry. The depth of the facade also allows the facade to be constructed from large load bearing units which require fewer movement joints than contemporary site laid brick cladding. This leads to a building with a more monolithic character akin to traditional masonry while minimising the amount of on site labour. The overall development was delivered to budget within a tight 26 month programme.

” We are delighted with the completion of the Garden Halls development which is a flagship development for UPP. The residence sets a new bar for student accommodation in the heart of our capital city, offering exceptional architectural quality and modern facilities and delivered by leveraging cost effective private investment attracted by the strength of the UK HE sector as an investment proposition. We have worked in partnership with the University of London since 2013 and are extremely proud to have delivered this project. The halls play a central role in the community with local residents able to enjoy the new landscaped gardens and tennis courts, with the quality of the architecture underpinning Garden Halls’ important position within the Bloomsbury Conservation Area and local heritage of the area.  Executive architects, tp bennett, and principal architects of the façade, Macreanor Lavington, designed and delivered the halls with sustainability and the environmental performance at the heart of the project, which is on target for a BREEAM (Building Research Establishment Environmental Assessment Methodology) ‘excellent’ rating.”

“The challenge was to design the facade for a large new student Hall of residence in the context of the Georgian Crescent that frames Cartwright Gardens and the wider Bloomsbury conservation area. Our approach embraces the repetition inherent in the brief for student halls.

The depth of the facade allows for the modelling of light and shade appropriate to a building of this scale. The unique Danish brick combines references to the warm pale hues of Portland stone and the texture of the surrounding Georgian brickwork which the shadows of the grand London Plane trees within the garden can play. The brass and stone of the entrance reference the entrance detailing of 19th century buildings with the hues of the stone reflecting the shades of autumn leaves within the square. It’s been finely crafted and beautifully made.” 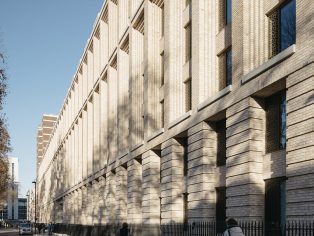