Middle England has the best of England. A stone’s throw from the ancient Fosse Way, and a little south of Stratford upon Avon, lies the Cotswold village of Broad Campden; smaller than neighbouring Chipping Campden, not so well known as Moreton in Marsh or Burford, the village has a pub and a church – the standard amenities. But occupying all one side of the main street is The Malt House, some of whose guests still come back to stay long after their first visit. And The Malt House’s charm is evident: in the year since owner-manager June Denton took it on, there have been thirty-two reviews – one was Very Good, and all the rest Excellent.

“We have huge numbers of returning clients, some from decades ago, and they recommend their friends – word of mouth is very valuable to us.”

It was a going concern when June took it on, a year ago, but she knew she could do better. With family funding and other support, she settled into her favourite part of the world. Wise move: it’s a much loved part of the world for very many people, in the UK and internationally.

June – a native of Edinburgh – had always loved the Cotswolds, an affection shared by her sons Peter and Paul, each of whom has a connection with the new enterprise. “It was always the area we were going to adopt as our own,” says June, “no matter what kind of project we developed, or just as a wonderful place to retire to.”

Retirement is the last thing on June’s mind. Her background is not in the hospitality industry at all; but like many of those who make a radical yet successful move into a different field, her qualifications were exactly right, she had all the motivation in the world, and she’d done her research.

“I worked in high-level philanthropy in London, securing funding for major projects, dealing with senior politicians, prominent philanthropists and other major figures. And I’m involved professionally with architecture (The Malt House is Grade II Listed), having worked in connection with some very important buildings such as The Laban dance-centre building in Deptford, which won the Stirling Prize for architecture; and I was a consultant with the Arts Council. So you might say I’m more than qualified in project management!”

“We came here to take The Malt House onwards & upwards, aiming directly at the luxury end of the market. So we invested heavily in a total refurbishment lasting four months, to bring everything completely up to 21st century standards while retaining the best of The Malt House’s character and history.”

The Malt House is still a venerable old timbered building, a classic Edwardian Arts & Crafts manor; that now has individual bedroom heating controls and wi-fi throughout, bespoke, beautiful bedrooms with individually chosen fabrics and wallpapers, antique oak furniture and crisp white Egyptian cotton linen. All rooms have an outlook onto the gardens, most of these through huge mullioned windows that frame a direct garden view.

“We aim to offer the very best in country hospitality, positioning ourselves not so much as a boutique hotel, more a luxury B&B! After all, one key test of any establishment is its ability to start a guest’s day with the best possible breakfast.”

And breakfast is a feast: the signature dishes are blueberry pancakes, rhubarb compote, fresh fruit salad – much of this sourced from the kitchen garden –and homemade granola, plus a full English to delight John Bull.

The Malt House’s imposing frontage is composed of the original malt house built about 300 years ago, together with adjacent cottages with which it was amalgamated in 1905. It has a classically Cotswold picture-book facade – with no suggestion of just how spacious it is… The house does of course include up to eight bedrooms for guests, a dining room, a reception hall with inglenook fireplace, and a fine sitting room. But behind all that mellow Cotswold stone lie three acres of land, with a croquet lawn surrounded by large cottage-garden borders planted with an abundance of perennials.

To one side, a stream runs beneath the croquet lawn through an Edwardian drystone tunnel; on the other side is an ancient stone wall with well preserved “bee boles” listed in the National Archives. (An archaic form of bee-keeping, bee boles were built mostly in stone walls, often bounded by a garden or orchard. They usually faced south to south east so that the bees would be warmed and roused by the morning sun.

There’s a paddock, with rare-breed sheep, a thatched summerhouse, and beyond is an orchard, with a traditional wheeled shepherd’s hut. None of this is even hinted at from the street – and neither is it overlooked at all. There is total privacy. “As far as the eye can see, there’s no-one else!” says June. Beyond the property there are distant views across farmland.

The interior has received a great deal of June’s creative attention – and apparently, it’s all in the genes. “My mother had an amazing sense of style! She had limited funds but created the most striking home interiors, using very little – the 1940s & 50s were austere…”

It helps that June and her whole family are passionate about décor & furnishing. Eldest son Peter Denton and his wife Marie are long-time fans of the Arts & Crafts movement, and donated some fine pieces of furniture to The Malt House.

Interestingly, from 1902 nearby Chipping Camden became known as a centre for the Cotswold Arts and Crafts Movement, following the move there by Charles Robert Ashbee with the members of his Guild and School of Handicraft, from London. The Dentons have followed in their footsteps.

“I had a large five-bedroom home in London, which provided much of the new décor. I pinched a carpet from my grandson’s bedroom and put it in the reception hall, where it looks perfect! Among other things I collect Russian dolls & silver; my dolls are laid out on display, and people really love them. The Malt House is more than an hotel, it’s a home from home.

“With the décor I’ve gone for a creative blend of old & new, though the dining room is very contemporary: people need to eat in light, bright, airy modern surroundings, especially to start the day. And I have a personal collection of contemporary art – paintings and sculpture – some of which is on display here. I think it’s important to put one’s personal stamp on things: using contemporary art does this perfectly, since if it’s been selected with love and care it demonstrates exactly your sense of style.”

As a palette from which to create a unique experience in hospitality, The Malt House has a head start. June fell in love with it at first sight – and knows many of her guests will, too.

“It’s where and how it sits in the landscape, in this beautiful, settled community: it’s a resting place. Set on a gentle rise, we gaze out across a classic English shire landscape. It’s perfect! And I do my very best to make the experience perfect for our guests. I cannot do anything more than I do at present – it’s total commitment.” 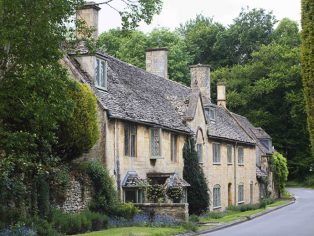