AKK Architects has unveiled plans for the Lebanese pavilion to be exhibited at the inaugural London Design Biennale, Somerset House  7-27 September 2016.

Architect Annabel Karim Kassar aims to provide an authentic experience of the streets as they are in Beirut, sharing the sights sounds and emotions of daily life in the Lebanese capital. Responding to the Biennale’s exploration of Utopia, the installation extols the ingenuity and optimism of the Lebanese people.

Towering scaffolds will enclose the River Terrace of Somerset House to create the streetscape. The structure will recreate the permeable façade of Lebanese buildings, punctuated not by windows and doors but rows and rows of gently fluttering curtains. Tangled electric cabling, street signs, and the overflowing barrows of street sellers will complete the scene.

The scaffolding will also house traditional shops selling a typically incongruous assortment of wares, from foods such as falafel, shawarma, orange juice, coffee and bread to an authentic barber shop and even a vendor of ceramic toilets; each shoulder to shoulder as they would be in downtown Beirut.

There will be cafe seating for people who wish to stay longer and absorb the atmosphere, sipping coffee and smoking narghiles just as the Beirutis do. Lebanese food will be served by Mourad Mazouz, the restaurateur and founder of sketch, and include artisans making fresh saj bread, and selling juice from colourful fan carts.

“The most crucial challenge is to evoke the feeling of Beirut, without masking the DNA of London which permeates Somerset House and every space around it. Rather, I would like to juxtapose the two cities; the installation will recreate the narrow, bustling streets of Beirut directly onto the wide promenade of the River Terrace and the Neoclassical façade of Somerset House. The most interesting thing for me will be to experience these two realities side by side and, perhaps, learning something new about them through this interaction.“

Crucially, the scene will represent the ingenuity and optimism of the Lebanese people, playing host to a variety of improvised street furniture, from innovatively repaired chairs to stacked sofas mounted on pick-up trucks. Curated from original sources in Lebanon, Kassar explores the Biennale’s 2016 theme, marking the 500-year anniversary of Thomas More’s work of fiction and political philosophy.

“When I first considered Utopia, I thought of the many design exhibitions I have visited (and contributed to) in the past years. On this occasion, I thought the most interesting thing to do would be to get away from that world, to do something less deliberate. This installation looks at the makers and the traditional aesthetics of Beirut; the memes of the design industry do not intervene. Instead we discover items made on the streets that are serving a need – improvised, ingenious, imperfect. We are not curating them into a distilled concept or passing judgement on them, but simply seeing them and accepting them as they are.”

The exhibition will be open to the public at Somerset House from 7-27 September 2016. Somerset House, The Strand, London WC2R 1LA 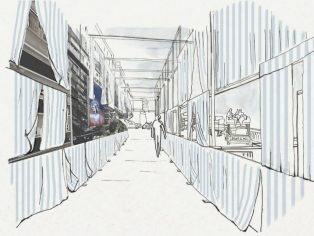 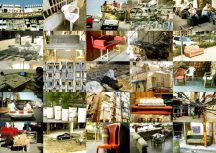 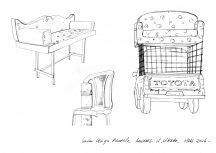