The project was completed for Stamford AFC and its partners New College Stamford and Burghley House Preservation Trust (BHPT).

The sustainable multi-sport project was initially part of a developer-led scheme, which was intended to be self-funded through the sale of land for new housing to deliver a stand-alone football stadium for the relocation of Stamford AFC. However, LK2 utilised its expertise to undertake a detailed study to assess potential grant aid the project could receive, in line with the strategic aims and objectives of the Football Association & Sport England.

LK2’s in-depth analysis, highlighted a local organisations which would benefit from improved sports & education facilities, resulting in New College Stamford joining the project as a key partner alongside Stamford AFC and BHPT.

“Over the course of this project we worked tirelessly to ensure all three partners benefited as much as possible. Each organisation not only gained enhanced and modern sporting facilities but also saved money – essentially spending less and achieving far more.”

“We are extremely proud of what has been achieved through this project. All the organisations involved have received political, cultural and financial benefits – alongside a future-proof business plan we have tailored for them, placing them in a great position moving forward.”

LK2 acted as an interface between the partner organisations and the grant funding bodies over the course of the project, ensuring that the maximum amount of grant aid was achieved and securing around £3 million of partnership funding towards the delivery of the scheme.

“The facilities have enabled us to improve the quality and frequency of the sessions we put on, and there is the potential for young footballers here to go on and achieve great things. We want to grow and move forward as a club, and Borderville is proving to be the platform that will increase our chances of doing so.”

The green belt development has not only met the needs and future-needs of Stamford AFC, New College Stamford and BHPT – but is now a hub of sports excellence for the community.

“This is an exciting facility that will be of benefit not just to the football club and its supporters, but also to students and many other community groups in and around Stamford.”

The Stamford sports centre is the largest FA single funded project outside of National Centre at St. Georges Park and exemplifies LK2’s diverse skill-set. The firm not only designed the centre but also enhanced the project significantly into a sustainable multi-sport centre, through extensive research, collaborative working and a smart approach to funding. Through creating a comprehensive shared facility LK2 achieved a better provision of sports facilities in Stamford and ultimately attracted multi-million pound grant aid, with reduced long-term financial risk. 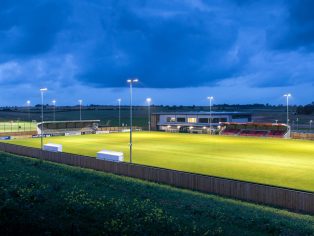