The LABC Awards were held at the Athena in Leicester and are held each year to recognise the high-quality work being carried out by building and design teams across the country.

LK2 received the Best Large Commercial Project Award for its work with construction company Gelder Ltd and engineering design services firm Alan Wood & Partners, to reinstate the leisure club at Kenwick Park Hotel after it was destroyed in a fire.

The scheme has already received several accolades including the Development Project of the year (under £5 million) award at the Lincolnshire Construction & Property Awards.

Andrew Kitchen, director at LK2, said: “Being recognised at the LABC Awards is fantastic – as it shows that this scheme is not only significant locally but regionally too. We came up against some stiff competition on the night including significant schemes in Leicester, Newark and Rushcliffe, so this accolade is really special.

“Winning this title in the East Midlands is something we are very proud of and we are excited to see how the project fares during the LABC Grand Finals in November, where the scheme has been listed as a finalist.”

The hotel is set within the 320-acre Kenwick Park Estate in Louth. The building’s original leisure club was a popular and well-known facility, until it was destroyed in a fire in 2014.

The new building has been divided into two distinct areas to house the spa and leisure club. As well as the restoration of the original dramatic pool hall, the building now boasts a state of the art gym and exercise studio, plus learner and baby pools alongside a thermal spa.

LK2 is a unique company of chartered architects and sports and leisure business advisors. It specialises in using sport and leisure as a vehicle to blend together a range of sectors including mixed use developments, residential, retail and urban regeneration schemes. 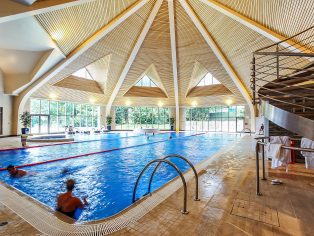