A Lichfield architectural practice has won a design award following a £5m project to restore a Birmingham church after it was destroyed by an arson attack.

Brownhill Hayward Brown Architects were named winners at the South Staffordshire Partnership Design Awards for their work in refurbishing St Barnabas Church after the blaze which gutted the 1822 Grade II listed building in October 2007.

The fire caused irreparable damage to the 1893 timber roof, with only the west bell tower surviving the blaze, and took seven months to remove unsafe remains and stabilise.

After consulting with Reverend Freda Evans, the congregation and the Parochial Church Council (PCC), Brownhill Hayward Brown were able to keep the majority of the original shell as well as cleaning and repointing the stonework to ensure St Barnabas was still recognisable as the old building. The retention of the shell allowed the architects to ensure the ecclesiastical layout remained as before with seating for 300 worshippers.

A spectacular fully-glazed extension was built to accommodate a café space and grant easier access from a new entrance, allowing views into the building to demystify the church for passers-by. The destroyed sanctuary steps were replaced by a new circular dais and a new bigger chapel is sited to the north of the chancel. Andrew Hayward, director at Brownhill Hayward Brown, said:

“Extensions to historic buildings are particularly challenging at the best of times. When a fair proportion of the historic fabric has been destroyed by fire, the challenge is multiplied. We are thrilled to have been recognised by the SSP for the quality of our design work.

“Whilst the fire was a disaster, it was also seen as an opportunity to improve the former building and, by integrating new structure and facilities, bring St Barnabas into the 21st century.

“The project gave us the chance to marry contemporary designs with the historic values of the church. What is important is that it remained a good neighbour to the area, particularly as it is located on a busy high street. The work has enhanced the church’s bond with locals and made it more widely accessible for all.”

As well as the St Barnabas project, Brownhill Hayward Brown has also won an award for its work with Lichfield Parks at the South Staffordshire Partnership Design Awards ceremony. It was the second accolade the project has received after being named overall winner at the 2012 British Association of Landscape Industries awards.

Following the success of Lichfield Council in securing a Heritage Lottery Fund grant, the park underwent £4m worth of work including the restoration of existing buildings such as the bowling pavilions and changing rooms, whilst also building two new cafés to increase revenue. Improvement work also enhanced the park landscape and memorial gardens. 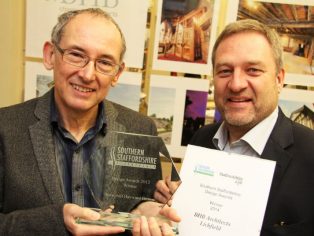