A lesson in large-scale Passivhaus – University of Leicester

Over a kilometre of ‘earth tubes,’ offsite manufacture, and air tests using an aircraft engine were all required to make the UK’s largest Passivhaus building a reality. Stephen Cousins reports.

Passivhaus is the fastest-growing energy performance standard in the world, but in the UK its use has been limited to domestic projects or smaller scale non-residential buildings.

That situation changed in December when the University of Leicester completed the £42m Centre for Medicine. With a gross internal floor area of just under 13,000 m2, it is the largest building designed to Passivhaus standard in Britain and around four times larger than the previous record holder, The Enterprise Centre at the University of East Anglia, which was opened in 2015.

The cutting edge facility, located on the main city centre campus, employs a ‘fabric first’ approach to construction, with high levels of insulation and low levels of air permeability and thermal bridging across the whole building envelope. That enables a major reduction in heating and cooling loads and should help the centre slash its annual energy bills by 80 per cent.

The stringent requirements of Passivhaus, including ultra low U-values for the building envelope and less than 15 kWh/m2 of energy for space heating, tested the design and construction team, many of whom were unfamiliar with the technologies and standards involved.

“The idea of doing Passivhaus at this scale was a very new thing when we came to the project in 2010, and trying to find contractors, subcontractors, and products that could deliver the chosen aesthetic was difficult.”

“The standard essentially added an extra step to the design development process and instead of drawing a detail then sending it to the subcontractors to work up, it had to go through an extra layer of checking for thermal bridging and airtightness and ensuring everyone understood what was required.”

The Centre of Medicine brings together the Schools of Medicine, Health Sciences and Psychology under one roof for the first time, with facilities for more than 2,350 staff and students.

It comprises three towers of three, four and five storeys, linked by an atrium. The ground and first floors are devoted to communal student and public areas, including lecture theatres, teaching spaces, open access study areas and a cafe. The upper storeys house academic offices and research labs.

The centre is characterised externally by its chunky white-rendered colonnade, green wall, and curtain walls with narrow slotted windows and red brick slips. The design draws inspiration from other notable buildings on the campus, including the world-famous Engineering Building, completed in 1963 and designed by Sir James Stirling and James Gowan, and the brutalist concrete Charles Wilson Building designed by Sir Denys Lasdun.

The client’s brief called for best in class energy performance from the outset as part of an overarching strategy to reduce carbon emissions on the estate by 60 per cent by 2020.

“All of their estate was going in the wrong direction, so they wanted to make a mark and an exemplar demonstrating their future environmental ambitions.”

The original aspiration was for a carbon neutral building more reliant on renewable energy sources, but as the brief developed and the project expanded in size without a corresponding hike in budget, a focus on Passivhaus principles was identified by building services consultant Couch Perry Wilkes as a more cost effective option.

Passivhaus standards are technically onerous, air tightness had to be kept down to 1.0m2/(hr.m³), no mean feat in a building of such size and complexity. The roof, walls and ground floor slab had to be highly insulated, with U-values of 0.13 W/m²/k.

“With Passivhaus you need to know exactly what you are going to build before going to site because you could rapidly repeat an inaccurate detail that would cause you to miss out on Passivhaus certification,” says Chadwick.

He adds that the use of BIM software was “vital” to ensure that all aspects of the design were coordinated without clashes and achieve a level of accuracy that would have been “very difficult using just 2D drawings.”

The curtain walling for the three towers was prefabricated off-site to increase quality and precision. There are approximately 500 brick slip panels in total, each one is storey height and incorporates windows and a concealed blind.

An £80,000 large scale mock up of one section of the curtain wall, was tested to its limits by blasting it with air and water using an old aircraft engine to identify any issues.

The walls for the ground and first floors were constructed using traditional masonry brick and block cavity walls, filled with 300 mm of cavity insulation. This approach was more time-consuming and placed greater reliance on the quality of individual workmanship, using wet plaster and tape to achieve airtightness.

Chadwick adds that getting the details right on site was key:

“Main contractor Willmott Dixon, had to keep on top of what everyone was doing on site to ensure the correct detailing, installation and workmanship was up to scratch.”

Sectional air permeability tests of discrete areas of the building were carried out to check progress. An earlier plan to air-test an entire block, or entire wings of the building, was ditched when the team realised the complexity required to coordinate over 200 people on site to temporarily seal up the structure.

The Passivhaus approach requires, counter-intuitively, that a building’s heating requirements are met by ‘actively’ pre-heating fresh incoming air. The Centre of Medicine utilises a state-of-the-art heating, cooling and ventilation system, and 30 per cent of the air entering the building passes through Rehau ‘earth tubes,’ also known as ground air heat exchangers.

The earth tubes pre-cool incoming air, in the summer, and pre-heat it in the winter, to enable a consistent comfortable indoor temperature.

A total of 1.6 km of earth tubes snake through the ground directly beneath the building, at depths of three to six metres, requiring a small feat of civil engineering to coordinate and install them around piles, and other below ground services, such as drainage, cabling and ductwork. The tubes rise up from the ground through non-structural columns in the white colonnade to feed air into the building.

Extra cooling is provided in the ground and first floor spaces, with higher occupancy, using a form of thermally activated building structure. Chilled water is passed through pipework embedded 50 mm into the exposed concrete ceiling soffits to enable cooling across the entire slab and so reduce peak temperature loads. In addition, the exposed concrete frame provides thermal mass to help regulate peaks and troughs in temperature.

The building overturns some preconceptions associated with Passivhaus design. The orthodox drive to orientate windows to face south, with fewer or smaller openings facing north, east and west, to avoid excessive solar gain and energy loss, was rejected in favour of a more evenly distributed openings.

“The client did not want to have one professor with great views and a large window and another with a small window and a dingy outlook,” says Chadwick. “It is easier, on a larger project, to compensate with improved performance elsewhere, for example, via better performing insulation. On a smaller project every individual element can make a more significant impact on the overall end result – it is all to do with the proportion of the change relative to the overall scheme.”

Another commonly held belief, that Passivhaus buildings should not include openable windows, due to the impact on airtightness and thermal efficiency, was rejected. The Centre features 100 per cent fixed glazing, but every office has an openable window vent, located behind an external louvre panel, designed to allow in fresh air in a more controlled fashion.

The Centre for Medicine’s Passivhaus assessment was carried out by Plymouth-based energy consultants WARM, who suggested alternative solutions during design, then independently verified the design and carried out regular independent on-site inspections.

Certification helped the project achieve a ‘19’ energy performance asset rating, placing it in the EPC ‘A’ category. “On a standard build we would have needed a rooftop photovoltaic array about twice as large as the 150 m2 array we have on the building to reach the same EPC rating. Passivhaus meant we were starting from a very low energy base point,” says Chadwick.

Unusually for a building of its type, the Centre is targeting a Display Energy Certificate ‘A’ rating, to demonstrate that it performs to the same high level of energy efficiency in operation as it does in design.

“It is not unusual for an EPC ‘A’-rated building to perform to an ‘F’ or ‘G’ standard in operation. We are trying to make a commitment to say, it was designed to achieve this  standard and if it doesn’t we need to get to the bottom of why,” says Chadwick.

A three-year ‘Soft Landings’ period will see the main contractor, design team and university  stakeholders monitor energy usage in operation and implement measures designed to drive it down.

Indications so far are encouraging. According to Willmott Dixon, predicted energy consumption at the new building is less than a fifth that of the existing school of medicine, located across the road, at 80k Wh/m2 compared to 550 kWh/m². The project is a lesson in energy performance that is relevant to educational institutions the world over. 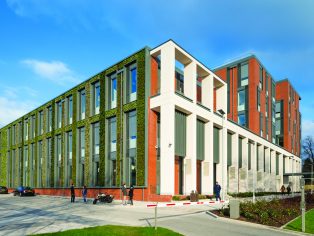 Use of BIM software was vital to ensure all aspects of the design were coordinated, without clashes © Associated Architects